By Olav Rokne: Over the past several weeks, a group of fans has been working on a proposal to abolish WSFS constitution clause 3.12.2, which could result in a Hugo category getting no award even when that is not the express wishes of voters. The group proposing this change to the WSFS constitution includes people who are presently or have recently been finalists in the categories most likely to be affected by 3.12.2 of the constitution.

It would be exceptionally embarrassing for a Worldcon to have to explain why a finalist would have won the Hugo except for — oops! — this bit of outdated fine print. The best course of action is to eliminate that fine print before such a circumstance arises.

Here is the current draft of the proposal that we intend to present to the business meeting:

Over the past several years, several Hugo Award categories have come close to not being awarded due the current wording of, but not the original intent of, 3.12.2 of the constitution.

Since 2,362 final Award ballots were cast in 2021, if any category received fewer than 591 votes in the final count, then a result of “No Award” would have been declared. Fancast received 632 votes, barely scraping past that 25 per cent threshold. Fanzine (643 votes), Editor – Long Form (667 votes), and Fan Writer (680 votes) were all poised near the abyss.

For context, consider that 591 is more votes than any category received in 1963 when 3.12.2 was first proposed.

At Denvention 3 in 2008, only 302 people voted in the Fanzine category. By absolute terms, this was less than half the number that voted for Fanzine at Discon 3 in 2021, but because only 762 people voted in the Hugos overall, the category had a participation rate of 39.6 per cent, and was in no risk of falling prey to the criteria set forth in 3.12.2. Conversely, despite there being 643 votes cast in Fanzine last year, this only amounted to 27.2 per cent participation. 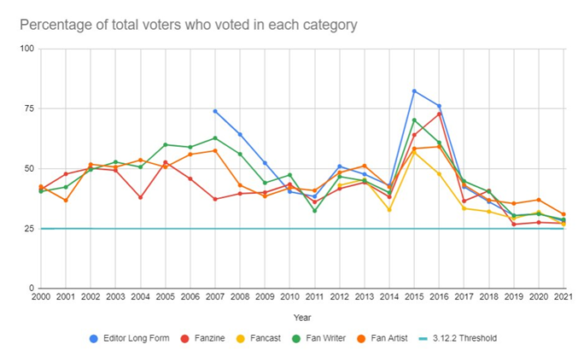 Worldcon has grown since the 1960s to the point at which this threshold is no longer relevant, and could even be harmful.

The fact that this threshold is based on the overall number of ballots cast in more high-profile categories (like Best Novel or Best Dramatic Presentation), it risks punishing these important and community-oriented categories (like Fancast and Fanzine) – despite the existence of substantial and sustained interest in these categories.

In an era of superhero franchises and a true renaissance of SF/F television worldwide, it is unwieldy to expect community-oriented categories to pull the same interest as multi-million dollar franchises. We do a disservice to the diversity of our community when we establish the latter as the threshold of popularity for the former.

To address this unanticipated problem, we would propose decoupling the viability threshold from the total number of final award ballots with the following proposal:

Strike the following words from the WSFS constitution:

Several other options for reform of this section have been discussed, such as changing the percentage, moving the threshold to an absolute value, or creating other metrics. However, eliminating this viability test altogether is the simplest action that would solve the immediate problems faced in an era of disproportionate increases of interest in some Hugo categories.