By Andrew Porter: I tried to get a press pass for Book Expo America, coming up the end of this month, but couldn’t qualify.

Apparently when I send links and news items to the people, news blogs and interested parties on my list (what I think of as my Usual Suspects), it’s not news, nor is it anything that Book Expo’s registration forms can categorize.

So I won’t be there. I will be at a party Baen Books is running on May 31 for Sharon Lee and Steve Miller, authors of the Liaden Universe series. Baen tells me that I don’t need a badge to attend their party.

Most of the people I worked for are all dead, anyway; among the most recent was Walter Zacharius, publisher of Lancer Books when I worked there in 1967-68. I’d liked to have given a whole bunch of photos I’d taken over the years of Peter Workman to his family (I guess I can do this directly at the company, any time).

My first BEA — then called the American Booksellers Association, ABA convention — was during a Disclave some time in the 60s or 70s, when both were held simultaneously in Washington’s Sheraton and Shoreham Hotels. I remember when the exhibits were little card tables, set up by publishers in the Shoreham’s garage. ABA grew, of course, and the first one I actually registered for was in 1975.

I have my memories of glorious parties at the conventions, for instance the party for The Name of the Rose at the Washington DC mansion of the Italian Ambassador to the US, canapes served around a swimming pool set in a hillside; DAW’s 10th anniversary party on a riverboat in New Orleans; watching the first performance of the Rock Bottom Remainders, with Amy Tan in a silver lamé dress, and famous writers belting it out (recently rediscovered several rolls of color photos of the performance); the Playboy parties at the Mansion in Chicago, and in 1992 at Hugh Hefner’s house in LA (and the horror when everyone who worked at Playboy Press was killed when their DC-8 crashed on take-off from Chicago, en route to ABA in LA); and the press party for Newt Gingrich’s Tor book, Window of Opportunity, in the Capitol Building’s Mike Mansfield caucus room, during the 1984 ABA.

Present were Gingrich, Tom Doherty (see my photo of the pair on page 22 of the August 1984 SFC), various authors, and Reagan-era politico Lynn Nofziger. There was an awkward moment when Nofziger enthusiastically asked the room whether everyone was going to get behind President Reagan’s re-election bid. Dead silence greeted this, and Nofziger suddenly realized that the room was full of liberal New York publishing types, not dyed-in-the-wool Republicans. He left shortly after.

Memories: Bantam changing the color of their booth each day; the tiger at the Brigham Young University Press booth; McGraw-Hill’s enormous sand castle, finished minutes before the end of the convention; lots of press screenings of upcoming films, including Alien, before release, before anyone knew about John Hurt’s chest-bursting scene (I shut my eyes); Goonies, before the pirate ship was inserted in the closing scene, and the actors starred in amazement at an empty horizon; all the Star Wars films; and countless others.

I used to do a guide to the SF/Fantasy/Horror on display at the convention, complete list lists of genre authors signing, relevant freebies, and other facts, done by going to the Publishers Weekly offices where PW allowed me evening access to their original publisher forms. Where are Genevieve Stuttaford, Barbara Bannon, Sybil Steinberg, Sonja Bolle, the wonderful photographer Helen Marcus, now? (I still have incriminating photos of a much younger Calvin Reid and thousands of others, and my “Honorary Important Person” badge as authorized and signed by a passing Garrison Keillor.)

Eventually my guide, which started at several pages, shrank to two, then finally one. The number of SF publishers and relevant booths dwindled; genre authors fell to a handful; most editors stopped coming. I did the 20th and last Guide in 2002, the same year I was fired from the magazine I started in 1979, Science Fiction Chronicle.

I find it inexplicable that I’m still doing news, still sending out links and articles more than 50 years since I was a columnist in Science Fiction Times — is it an obsession or just a disease?

Oh well. A nice run. See some of you at (some) of the parties. 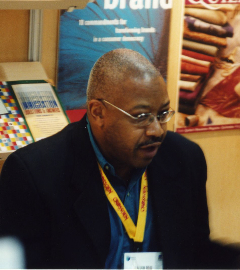 3 thoughts on “I Guess This Isn’t News”