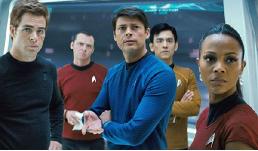 The iconic Enterprise crew is back again, fresh from a mission that results in an endangered Spock (Zachary Quinto) rescued by Kirk (Chris Pine) in a manner that violates a key Starfleet Prime Directive while on a primitive, volcanically-challenged planet. And that’s just the first ten minutes.

She rates the film a four on a five-point scale.

5 thoughts on “Into Darkness, With Popcorn”