By James H. Burns: Remarkably, Mike, today is the 50th anniversary of when the Batman television series debuted on ABC-TV….

And the world of pop culture, of course, would never quite be the same!

I wasn’t even four yet.

It was some weeks before I caught up with the series. My first episode was Cat-Woman’s debut on the series, “The Purr-Fect Crime.”

Soon, like millions of other kids across America, I was dressing up as Batman (as well as pretending to be a legion of other super-heroes, my imagination further fired up by the following Autumn’s premiere of The Marvel Super Heroes, a daily syndicated animated series,  as well as by watching the George Reeves Superman television show, in repeats). I used to have a photo of myself, from that era, dressed as Batman, standing in the living room, lecturing my family on crime prevention…

Within months, I was even inventing my own super hero characters, “drawing” comic books on single sheets of small paper that I would then staple together…

Here are some words from a column I wrote a few years ago, edited, reflecting on those halcyon days! 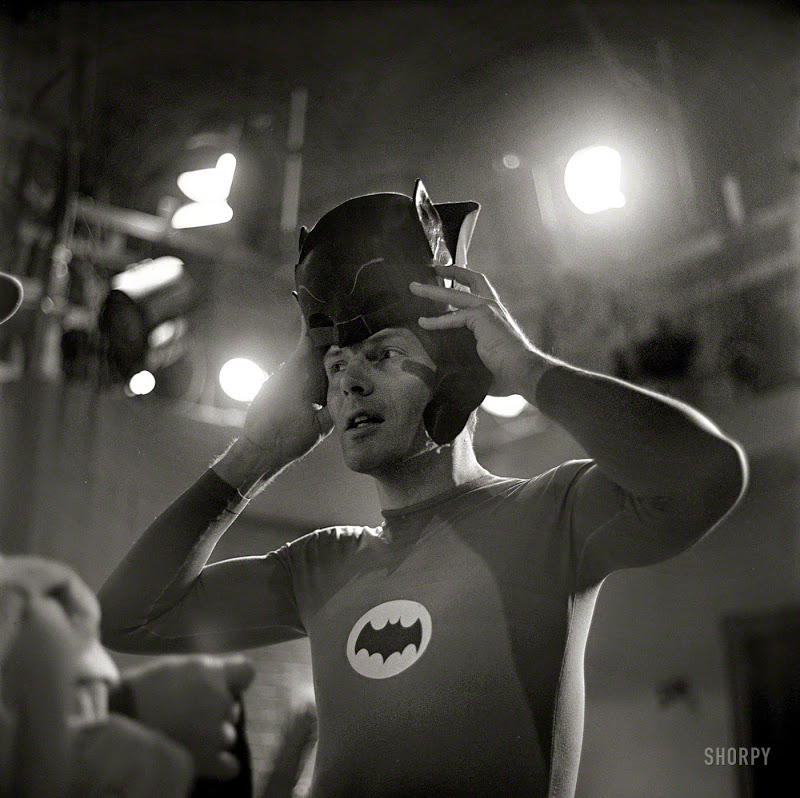 One afternoon, when I was about four, I was transfixed in front of the television set. There was no cartoon on, or sitcom, but an afternoon TV newscast. It wasn’t even a broadcast, but a newsread, with just a station logo on the screen. An aunt babysitting me wondered what a tot was doing, devoted to the news. Now I hadn’t suddenly become a budding journalist. I actually remember, oddly, that I was blowing off an episode of Astro Boy.

Somehow I had caught the announcer doing a story on how Batman, in the form of Adam West, had visited our real New York City Hall, and Mayor Lindsay, or someone (not Mayor Lindseed of the TV series’ Gotham), had given him some proclamation. I kept watching, hoping there might be a film clip of my fave, being honored.

Some time before, or maybe later, I had been roundly disappointed, when my family went to a local movie theatre waiting to see Adam West make a personal appearance, to promote the Batman feature film. With about 1000 other folks crowding the parking lot, we were stunned when neither the Batmobile, nor the actor, ever showed. It might have been my first lesson in being on the wrong end of a promotion gone bad. It wouldn’t be until years later that I learned that the sort of hard-to-believe, hard-now-to-remember Beatlemania kind of fervor that surrounded the first season of the Batman TV show, which debuted in January of 1966, had resulted in what was supposed to be West’s schedule that day totally going up in a cloud of bat-smoke.

It can be neat as a child, when while some part of you may know that your favorite heroes aren’t real, you might quite not be sure. (One of my friends, Thomas V. Powers, who used to work in television news, likes to tell the story of how when a boy, he would put on his Batman cowl, and patrol his New York City block on tricycle, “protecting the citizens of his neighborhood”.)

Nor is the wonderful frisson that can come when seeing a childhood hero necessarily limited to one’s youngest years. My Dad, for his entire life, remembered the thrill he had, when as a teenager, in the early’40s, he saw Roy Rogers exiting Manhattan’s Statler Hilton Hotel, in full western regalia, making his way over to the rodeo.

And some things do indeed come around.

Almost exactly twenty years after I was chagrined in the suburbs, I was a guest speaker at a comic book convention, in Manhattan. Adam West was also a guest. As my girlfriend and I sat in the audience, we couldn’t believe the excitement we felt, as that old Batman theme music poured from the sound system, and West came on stage. West, as many of you know, is absolutely charming and (as also represented in the book), a terrific raconteur on that special chapter of pop culture history.

Some fascinations, happily, never quite entirely go away. 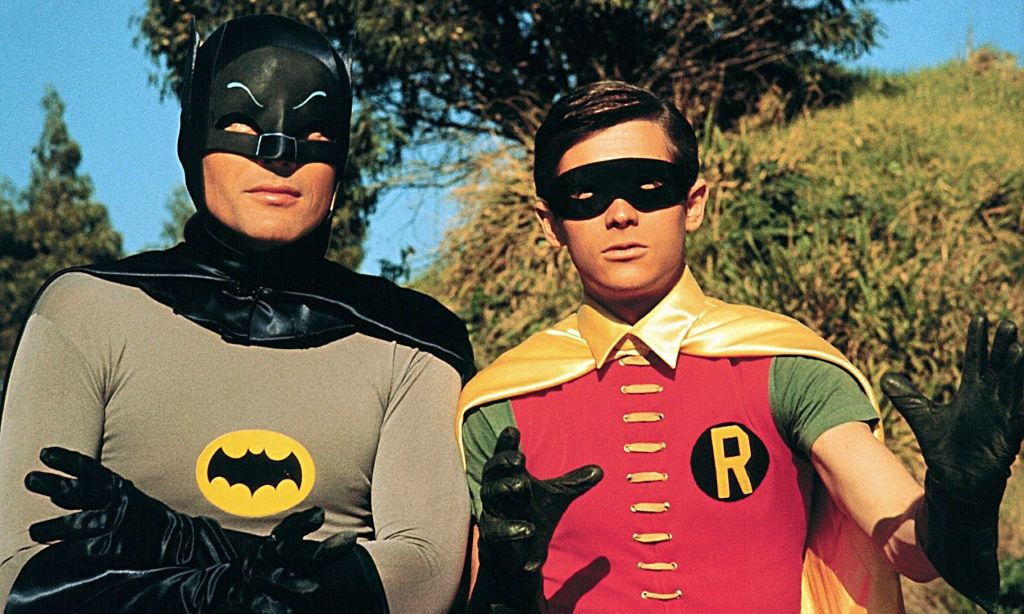