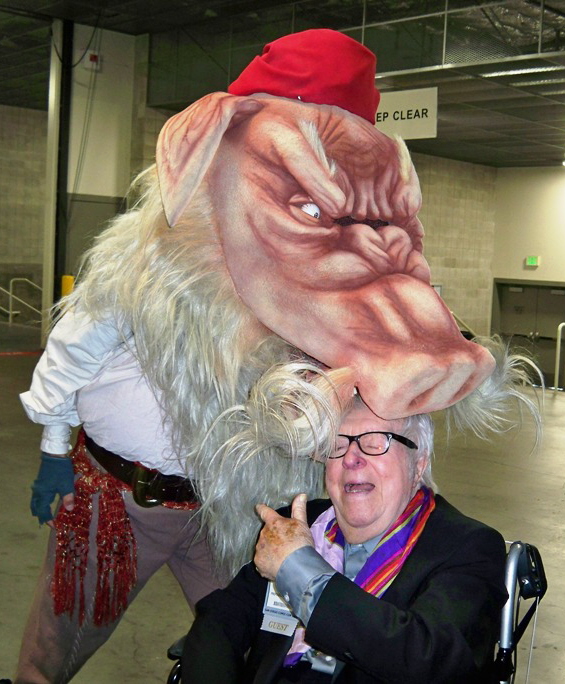 By John King Tarpinian (not pictured): My trip to Comic Con is not as your average attendee. Not because I am special but because I am lucky enough to attend with somebody who is, Ray Bradbury. Attending a convention with a living legend adds a whole new perspective to the show. Having parents holding their infant children next to Ray for a photograph can bring a tear to an eye. Yes, the costumed characters are nice and fun, what man does not like a pretty girl in a skimpy outfit, but the human stories one gets to hear is what makes the day special. A hundred, if not a thousand-plus times I could hear, “Oh My GAWD, it is Ray Bradbury,” “Thank you Ray” and “I love you Ray.”

As evidenced by the photos, Ray was not the only legend at the show. Within minutes of entering the hall Ray spied his dear friend, Stan Freberg. (For a big laugh Google Stan, Ray and prunes.)  John Landis and Ray took a private moment while a couple hundred people looked on. One of my favorites was Chuck McCann, who for years played Oliver Hardy. As Ray left for his lecture, up came Jerry Robinson of DC Comics fame.

Two next-generation attendees Ray saw were Joe Hill, respected author in his own right and son of Stephen King, and Monte Shulz, charged with keeping alive the legacy of his father, Charles Shulz.

There were others Ray connected with: Dave McKean, who illustrated Ray’s chapbooks, The Homecoming and Skeletons; Mystery writer Mike Mallory, whose son won first place in his school’s science fair project where he proved paper burns at 451° Fahrenheit; and Peter S. Beagle, author of The Last Unicorn.

Ray’s conference filled a 2,000-seat hall, with people standing around the walls. He came on stage to a standing ovation. The moderator for the panel was Arnold Kunert, an old friend and Ray Harryhausen’s business manager. Also on the dais was Sam Weller, Ray’s biographer and Jerry Weist, author of Ray Bradbury; An Illustrated Life.  Ray showed the video from July 20, 1969 where he was introduced by Walter Cronkite and then interviewed by Mike Wallace. (See the photo of a ghostly image of Ray at 48) As always, Ray talked about his life and loves.

Tim Hamilton was invited up on stage to talk about having illustrated the just released graphic novel of Fahrenheit 451, soon to go into a second printing. If you wish to see a sample of the work just sneak into a newsstand and pick up the July/August Playboy. (“But honey I really did buy it for an article.”) Ray did a brief signing at the dais but was ushered out because of the incoming lecture. We thought we had snuck out the back way but people were waiting for him. Ray signed for another fifteen minutes before we had to abandon the area because of the crowd forming.

Ray took one more quick tour of the hall and then it was off to dinner and the ride home.

Photos: (1)The Hall; (2) Ray meeting up with his old friend Stan Freberg; (3) Running into John Landis; (4) Ray and Chuck McCann; (5) Ray and Jerry Robinson, illustrator of Batman comics; (6) Ray meeting up with Joe Hill (Stephen King’s son); (7) Ray with Dave Mckean, UK illustrator of The Homecoming chapbook; (8) Monte Schulz, Charles Schulz’s son; (9) Signing after the talk; (10) 2000 people fill the lecture hall; (11) On the dais with Arnold Kunert and Sam Weller; (12) An eerie photo taken of the big screen showing of the 7/20/69 Mike Wallace interview); (13) Tim Hamilton, illustrator of the F451 graphic novel (Tim is the one in the checked shirt); (14) Ray with Peter S. Beagle of The Last Unicorn fame.