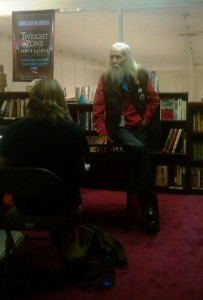 By John King Tarpinian: George’s first class at Mystery & Imagination Bookstore was basically an overview of his career, his resumé if you will. From his experiences as a young man hangin’ with the Rat Pack while they did his Oceans 11 then onto the Twilight Zone, Star Trek beyond. His philosophy about life and humanity to his belief in Santa Claus. After the first two hours a break was taken and then the talk resumed down the street from the bookshop at a local restaurant. There are seven more of these FREE classes on writing. George invites people to bring their works or works-in-process for critiquing or to bounce off ideas. If you have no writing talent, as myself, it is still interesting to listen to George inspire a new generation of writers.