By James H. Burns: There were all kinds of pioneers of public interest in the space program, once upon a time. If one turned out not to be quite all he seemed to be, it’s still fascinating to think how many young minds he might have influenced, or gotten interested in our future among the planets.

The other day, I was looking through a short book by the late Hank Stohl, on the history of children’s TV shows in Pittsburgh, When We Were Kids.

Stohl was a local television host in the area, in the 1950s and 1960s. I encountered him later in the ’60s, when Stohl’s daily kids show was brought to New York for a while, on WPIX. (I am fairly certain he was accompanied by his sidekicks Knish, Rodney Nugent Buster Hackenflash III, and Connie–puppets, of course!)

The book is barely a brief photo album, but one picture particularly caught my eye: Stohl standing in front of a large rocket ship, situated sidewise, aloft on supports on a trailer bed, emblazoned with, “Hank Stohl and Johnny Skyrocket…  National History of Flight… Pittsburgh Airbase…  July 4, 5, 6…”

Kids-TV history, particularly from my era, is an interest of mine. When I Googled “Johnny Skyrocket,” it was intriguing to discover, thanks to an harticle by Dave O’Malley at the Vintage Wings of Canada website that “Johnny” was something of a regular for years at certain air shows in MANY states, making countless appearances on local television.

“He would wear a cape and a golden flying helmet with dazzle dust, and he had a big golden J on the chest of a blue uniform. And he had a mask.”

(At other times, apparently, “He wore a blue satin flight suit and silver helmet and boots.”)

Ultimately, this linked article is more about a small element of the mid-way point of aviation history (including Skyrocket’s evident fascination with the de Havilland jet), but there’s no telling now, half-a-century later, how many people saw this “man of the future” act, and, possibly, were stirred… 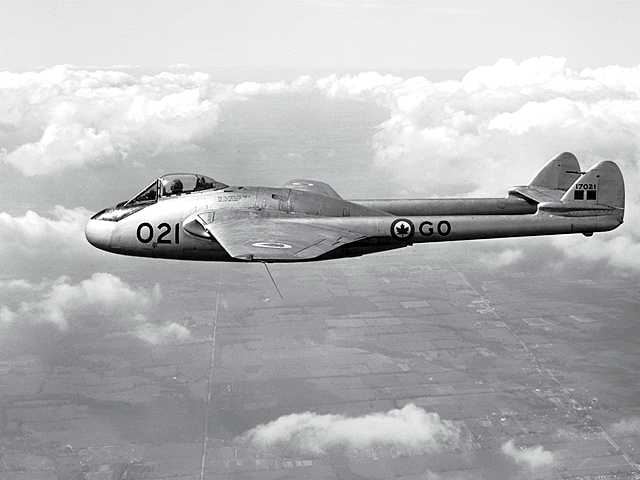 4 thoughts on “Johnny Skyrocket, The Golden Vampire and The Jet Craft Mystery Jet”