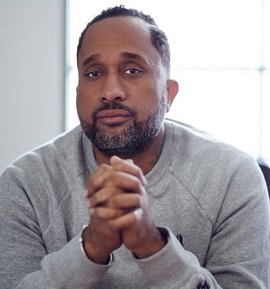 Black-ish co-creator Kenya Barris is the 2016 winner of The Rod Serling Award for Advancing Social Justice Through Popular Media, given to a “contemporary media industry professional whose work shines the light on prejudice, inequality, and evolving social norms.”

Established by Ithaca College, the award honors Rod Serling and his pioneering efforts in the television industry. Serling taught at the college from 1967 to 1975.

As a writer, Kenya Barris is known for his quick wit and unabashed sense of humor. He started out as a writer in 1998 and has since worked on several television shows, including CBS’s Listen Up, CW’s The Game and Girlfriends, and Fox’s I Hate My Teenage Daughter. He has also sold a number of pilots—including America’s Next Top Model, which he co-created and is currently shown in 49 countries with 21 internationally formatted offshoots—as well as BET’s The Start Up, starring Diggy Simmons, and We Got Next, Hulu’s first half-hour comedy series.

Kenya Barris is under an overall deal at ABC Studios where he’s the executive producer and co-showrunner on Black-ish as well as the co-creator and executive producer of the upcoming hour-long series Unit Zero, starring Toni Collette, and a half-hour series Libby & Malcolm, starring Felicity Huffman. He is also under an overall deal with 20th-Century Fox Film where he’s developing several projects including Uptown Saturday Night, Cheaper by the Dozen, and Stir Crazy.

Barris was presented the award in a ceremony at the Paley Center for Media in Los Angeles on November 16.