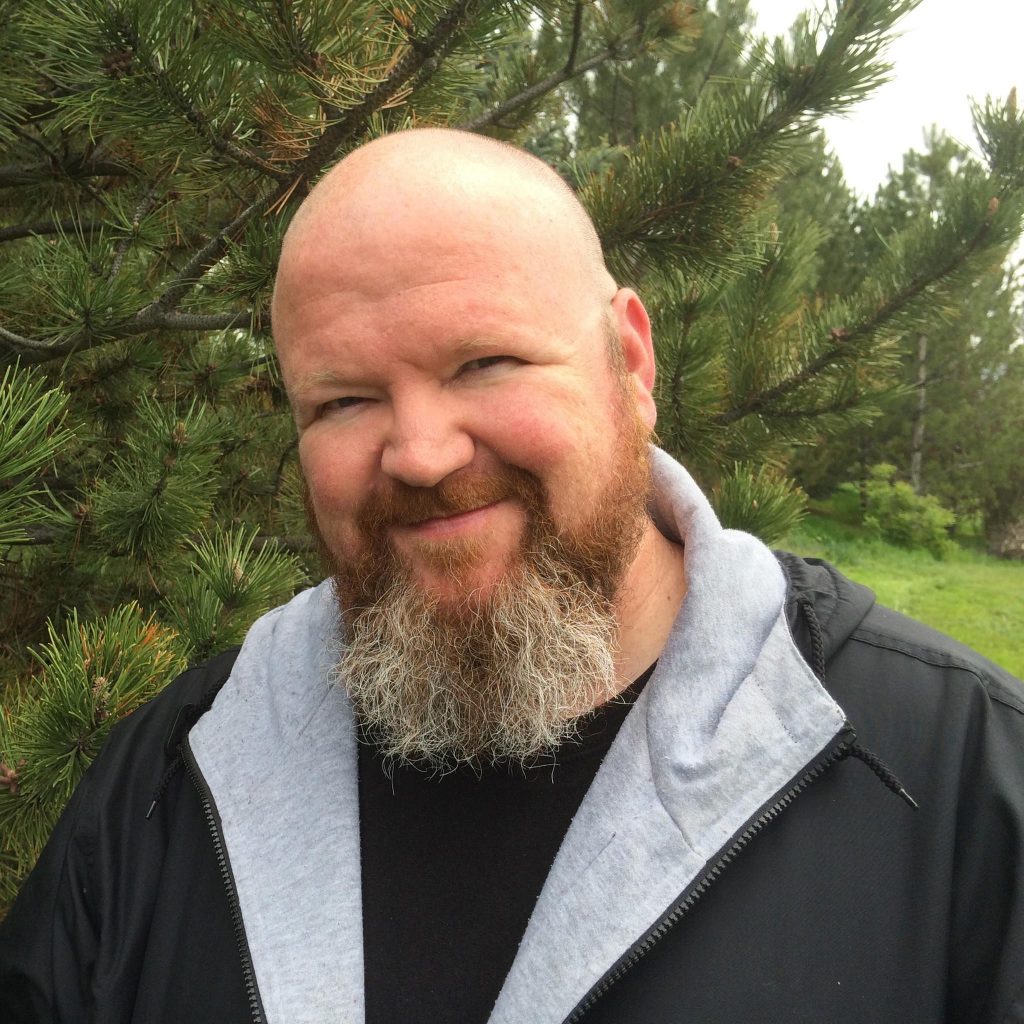 By Carl Slaughter: After eight books in his Del Rey-published, New York Times/USA Today-listed humor fantasy series, The Iron Druid, Kevin Hearne is offering a spinoff.  Purloined Poodle is the first in the Oberon Meaty Mysteries series. Oberon being the wolfhound friend of Atticus O’Sullivan, said Iron Druid, who over the series battles a host of classic fantasy creatures and a few famous Greek and Nordic gods. Hearne is also the author of the Star Wars novel, Heir of the Jedi. 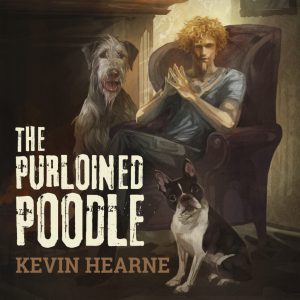 Thanks to his relationship with the ancient Druid Atticus O’Sullivan, Oberon the Irish wolfhound knows trouble when he smells it—and furthermore, he knows he can handle it.

When he discovers that a prizewinning poodle has been abducted in Eugene, Oregon, he learns that it’s part of a rash of hound abductions all over the Pacific Northwest. Since the police aren’t too worried about dogs they assume have run away, Oberon knows it’s up to him to track down those hounds and reunite them with their humans. For justice! And gravy!

Engaging the services of his faithful Druid, Oberon must travel throughout Oregon and Washington to question a man with a huge salami, thwart the plans of diabolical squirrels, and avoid, at all costs, a fight with a great big bear.

But if he’s going to solve the case of the Purloined Poodle, Oberon will have to recruit the help of a Boston terrier named Starbuck, survive the vegetables in a hipster pot pie, and firmly refuse to be distracted by fire hydrants and rabbits hiding in the rose bushes.

At the end of the day, will it be a sad bowl of dry kibble for the world’s finest hound detective, or will everything be coming up sirloins?

Atticus O’Sullivan has been running for two thousand years and he’s a bit tired of it. After he stole a magical sword from the Tuatha Dé Danann (those who became the Sidhe or the Fae) in a first century battle, some of them were furious and gave chase, and some were secretly amused that a Druid had the cheek to defy them. As the centuries passed and Atticus remained an annoyingly long-lived fugitive, those who were furious only grew more so, while others began to aid him in secret.

Now he’s living in Tempe, Arizona, the very last of the Druids, far from where the Fae can easily find him. It’s a place where many paranormals have decided to hide from the troubles of the Old World—from an Icelandic vampire holding a grudge against Thor to a coven of Polish witches who ran from the German Blitzkrieg.

Unfortunately, the very angry Celtic god who wants that sword has tracked him down, and Atticus will need all his power, plus the help of a seductive goddess of death, a bartender possessed by a Hindu witch, and some good old-fashioned luck of the Irish to kick some arse and deliver himself from evil.

Atticus O’Sullivan, last of the Druids, doesn’t care much for witches. Still, he’s about to “make nice” with the local coven by signing a mutually beneficial non-aggression treaty—when suddenly the witch population in modern day Tempe, Arizona, quadruples overnight. The new girls are not just bad, they’re badasses with a dark history on the German side of WWII.

With a fallen angel feasting on local high school students, a horde of Bacchants blowing in from Vegas with their special brand of deadly decadence, and a Celtic goddess of fire vying for his attention, Atticus is having trouble scheduling the witch-hunt. But aided by his magical sword, his neighbor’s rocket-propelled grenade launcher, and his vampire attorney, Atticus is ready to sweep the town and show the coven they picked the wrong Druid to hex.

Thor, the Norse god of thunder, is worse than a blowhard and a bully—he’s ruined countless lives and killed scores of innocents. After centuries, Viking vampire Leif Helgarson is ready to get his vengeance, and he’s asked his friend Atticus O’Sullivan, the last of the Druids, to help take down this Norse nightmare.

One survival strategy has worked for Atticus for more than two thousand years: stay away from the guy with the lightning bolts. Plus things are heating up in his home base of Tempe, Arizona. There’s a vampire turf war brewing, and Russian demon hunters who call themselves the Hammers of God are running rampant. Despite multiple warnings and portents of dire consequences, Atticus and Leif journey to the Norse plane of Asgard, where they team up with a werewolf, a sorcerer, and an army of frost giants for an epic showdown against vicious Valkyries, angry Norse gods, and the hammer-wielding Thunder Thug himself.

Druid Atticus O’Sullivan hasn’t stayed alive for more than two millennia without a fair bit of Celtic cunning. So when vengeful thunder gods come Norse by Southwest looking for payback, Atticus, with a little help from the Navajo trickster god Coyote, lets them think that they’ve chopped up his body in the Arizona desert.

But the mischievous Coyote is not above a little sleight of paw, and Atticus soon finds that he’s been duped into battling bloodthirsty desert shapeshifters called skinwalkers. Just when the Druid thinks he’s got a handle on all the duplicity, betrayal comes from an unlikely source. If Atticus survives this time, he vows he won’t be fooled again. Famous last words.

After twelve years of secret training, Atticus O’Sullivan is finally ready to bind his apprentice, Granuaile, to the earth and double the number of Druids in the world. But on the eve of the ritual, the world that thought he was dead abruptly discovers that he’s still alive, and they would much rather he return to the grave.

Having no other choice, Atticus, his trusted Irish wolfhound, Oberon, and Granuaile travel to the base of Mount Olympus, where the Roman god Bacchus is anxious to take his sworn revenge—but he’ll have to get in line behind an ancient vampire, a band of dark elves, and an old god of mischief, who all seem to have KILL THE DRUID at the top of their to-do lists.

For a two-thousand-year-old Druid, Atticus O’Sullivan is a pretty fast runner. Good thing, because he’s being chased by not one but two goddesses of the hunt—Artemis and Diana—for messing with one of their own. Dodging their slings and arrows, Atticus, Granuaile, and his wolfhound Oberon are making a mad dash across modern-day Europe to seek help from a friend of the Tuatha Dé Danann. His usual magical option of shifting planes is blocked, so instead of playing hide-and-seek, the game plan is . . . run like hell.

Crashing the pantheon marathon is the Norse god Loki. Killing Atticus is the only loose end he needs to tie up before unleashing Ragnarok—AKA the Apocalypse. Atticus and Granuaile have to outfox the Olympians and contain the god of mischief if they want to go on living—and still have a world to live in.

For nearly two thousand years, there was only one Druid left walking the Earth—Atticus O’Sullivan, the Iron Druid, whose sharp wit and sharp sword kept him alive while pursued by a pantheon of hostile deities. Now he’s got company.

Atticus’s apprentice Granuaile is at last a full Druid herself. What’s more, Atticus has defrosted an archdruid long ago frozen in time, a father figure (of sorts) who now goes by the modern equivalent of his old Irish name: Owen Kennedy.

And Owen has some catching up to do.

Atticus takes pleasure in the role reversal, as the student is now the teacher. Between busting Atticus’s chops and trying to fathom a cell phone, Owen must also learn English. For Atticus, the jury’s still out on whether the wily old coot will be an asset in the epic battle with Norse god Loki—or merely a pain in the arse.

But Atticus isn’t the only one with daddy issues. Granuaile faces a great challenge: to exorcise a sorcerer’s spirit that is possessing her father in India. Even with the help of the witch Laksha, Granuaile may be facing a crushing defeat.

As the trio of Druids deals with pestilence-spreading demons, bacon-loving yeti, fierce flying foxes, and frenzied Fae, they’re hoping that this time . . . three’s a charm.

When a druid has lived for two thousand years like Atticus, he’s bound to run afoul of a few vampires. Make that legions of them. Even his former friend and legal counsel turned out to be a bloodsucking backstabber. Now the toothy troublemakers—led by power-mad pain-in-the-neck Theophilus—have become a huge problem requiring a solution. It’s time to make a stand.

As always, Atticus wouldn’t mind a little backup. But his allies have problems of their own. Ornery archdruid Owen Kennedy is having a wee bit of troll trouble: Turns out when you stiff a troll, it’s not water under the bridge. Meanwhile, Granuaile is desperate to free herself of the Norse god Loki’s mark and elude his powers of divination—a quest that will bring her face-to-face with several Slavic nightmares.

As Atticus globetrots to stop his nemesis Theophilus, the journey leads to Rome. What better place to end an immortal than the Eternal City? But poetic justice won’t come without a price: In order to defeat Theophilus, Atticus may have to lose an old friend.