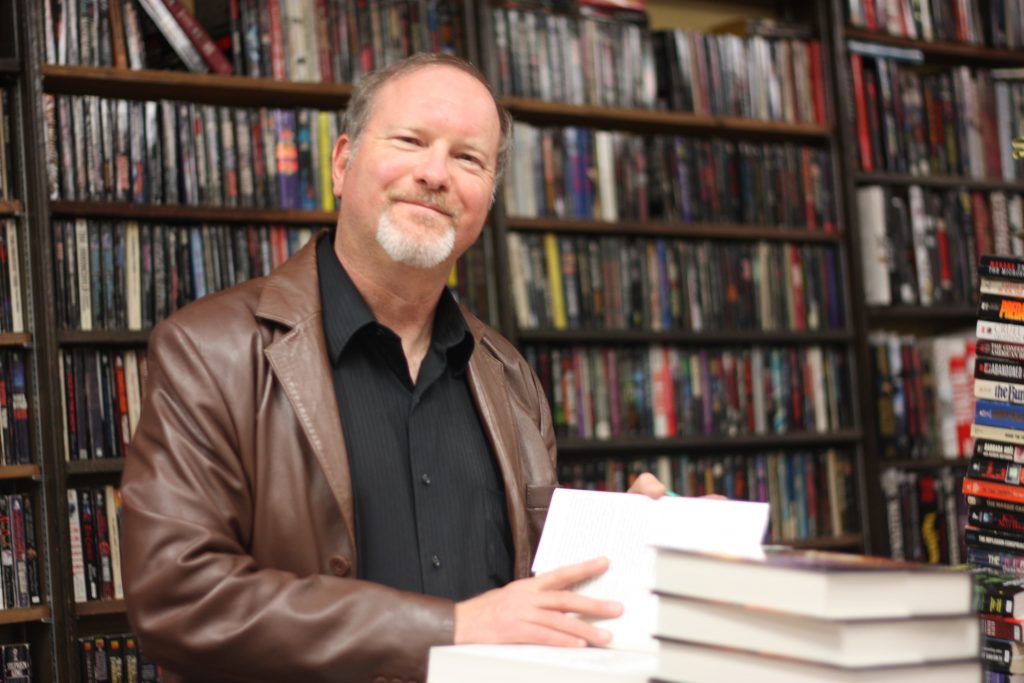 By Carl Slaughter: How do you sell more books than a major publisher? By going face to face with 4 million readers. So if you see Kevin J. Anderson at a con, he might be promoting one of his many books, but he might just as likely be helping 100 other authors promote their books, and they might just as likely be promoting his. Kevin calls this new marketing model “united artists” versus “big publisher/little author”. This is the same model for authors whose publishers say yes to some stories and no to others. Authors who have joined forces with him include Mike Resnick, Brian Herbert, Allen Dean Foster, and Tracy Hickman.

KEVIN J. ANDERSON: Ah, the good old days! Previously, a perfectly viable model, a big publisher with big distribution and big offices in New York would take on an author and produce a book, using all their muscle to get copies out into bookstores. It’s very equivalent to big record labels making musicians into stars and then controlling their careers.

But, for good or bad, technology, marketing, and distribution have blown that bottleneck to pieces. Think about it—when is the last time you bought an album in an actual music store? Authors are able to go direct to readers now, selling eBooks and print books without having to get distribution through a chain bookstore. Authors are often more ambitious and more innovative in promoting their books. And the marketing is changing at warp speed—what worked six months ago may flop now. Indie authors are often right on top of these changes, which big old-school publishers may not embrace. Indie authors working together can be quite formidable.

CS: WordFire Press is a business, not an NGO. So what’s the business model? How do you be more friendly toward the author without endangering your own financial viability?

KJA: I started as an indie author reissuing my own backlist, but that proved so successful that other authors came to me. With my personal reputation in the field I brought in major authors with much to offer, as well as ambitious new authors who were motivated to promote their own books with the assistance of the tools I could bring to the table. We share in the effort, cooperate in pushing the titles, exchange podcasts and interview opportunities, and most importantly we appear at big shows together, selling each others’ books. The books don’t sell themselves, and It’s a synergy that really helps.

KJA: WordFire books are available in all eBook formats—Kindle, Kobo, Nook, iBooks, and all the others via Smashwords—and also in print, which we hand sell at the numerous comic conventions we attend. In 2016 alone, we exhibited at 22 conventions and were seen by 1.5 million attendees. If you count the reach of the TV, podcasts, and other social media we did at those shows, bump that number up to four million. But the authors are expected to help the promotion, and to help promote other authors’ books as well. United we stand, and all that.

CS: What was the inspiration for this project?

KJA: I saw the potential and started with my own old titles first, and then some specialty collections or editions of books that I knew I couldn’t sell to a traditional publisher. When those proved successful, Brian Herbert approached me for his own backlist as well as many novels of Frank Herbert that other publishers didn’t consider viable. We sold those very well, and then other authors came, Alan Dean Foster, Mike Resnick, Jody Lynn Nye, Allen Drury, Michael Stackpole, Tracy Hickman, as well as ambitious new authors who needed extra resources to meet their potential. Then our model of exhibiting at comic cons and meeting the fans directly also proved to be innovative and successful.

CS: What type of books do you publish?

KJA: We have done some outliers—romance, thrillers, non-fiction—but our real wheelhouse is in science fiction and fantasy, the field and the authors I know so well.

CS: How long have you been publishing? How many authors? Which authors? How many books? What kind of sales figures?

KJA: We’ve published nearly 300 titles and over a hundred authors. Our titles are on all platforms (many indie authors just go for Kindle and nothing else), and we are also widely distributed through the Baen eBook Library. We are expanding by leaps and bounds and always looking for new techniques. The sales depend on the authors—an unknown who really promotes can sell better than a big name who is more passive.

CS: How is the “united artists” model going to change book publishing?

KJA: No one has more incentive to sell their book than the authors themselves. We give them direct input in their cover art and their cover copy. By leveraging the energy and connections of the author, while adding the resources we bring to the table, we can make a big impact. This is much different from the big publisher saying, “There, there, author, we know what we’re doing. Go to your corner and let us handle it.” Authors like to be empowered, but they also like a helping hand. We give them the best of both worlds.