(1) TAKING LIBERTIES. Gothamist reports New York City is plagued with another round of Nazi-themed ads — “Statue of Liberty Gives Nazi Salute in Huge Times Square Billboard for Amazon’s ‘The Man in the High Castle’”. (Photo here.)

Jesse Cullum works security at the City of Futurity – in fact, he just saved President Ulysses S. Grant from an assassination attempt, though he lost his Oakleys in the process.

The science fiction premise of Robert Charles Wilson’s Last Year (2016), is outlined in its opening scene. Oakleys are sunglasses that come from our time, but Ulysses S. Grant was one of the most important generals in the American Civil War. How can both exist in the same place? Well, in this novel, a “mirror” allows people to travel back in time, but to a specific point in the past — and it will produce a different a future. The people who travel back are tourists, and the City of Futurity, run by August Kemp, makes money from the past’s wealthy, who are curious to see the many inventions of the future. Also, Kemp steadily ships the past’s gold into the future. When the novel begins, The City of Futurity is about to begin its “last year” in the 19th century….

(3) THE NARRATOR’S TOUCH. Bookworm Blues has a wonderful variation on a common theme – “Best Audiobooks of 2016”.

I really want Kate Mulgrew to narrate all the thoughts in my head. I do. Honestly. I just want her to dig her way into my brain and just read my mind to me constantly. She’d make my random musings of, “Huh, I wonder what Frodo would look like with cockroach feet?” actually sound interesting. The Fireman is a fantastic book, and Kate Mulgrew is one of the best narrators out there. I think she kind of struggled with the English accent, but that’s easy to forgive because… LISTEN TO HER. She made this book one of those rare experiences where I listened to the book as much for the story as to just hear her talk to me.

(4) HINES BENEFIT AUCTION #10. The tenth of Jim C. Hines’ 24 Transgender Michigan Fundraiser auctions is for an autographed book and a Tuckerization from Tricia Sullivan.

Today’s auction comes from award-winning author Tricia Sullivan, for an autographed copy of OCCUPY ME and a Tuckerization (meaning you’ll show up as a minor character) in Sullivan’s forthcoming novel SWEET DREAMS ARE MADE OF THIS.

A woman with wings that exist in another dimension. A man trapped in his own body by a killer. A briefcase that is a door to hell. A conspiracy that reaches beyond our world. Breathtaking SF from a Clarke Award-winning author.

Tricia Sullivan has written an extraordinary, genre defining novel that begins with the mystery of a woman who barely knows herself and ends with a discovery that transcends space and time. On the way we follow our heroine as she attempts to track down a killer in the body of another man, and the man who has been taken over, his will trapped inside the mind of the being that has taken him over.

And at the centre of it all a briefcase that contains countless possible realities.

(5) VOYAGERS. Big Think tells you how to see it — “Massive Poster Details Humanity’s Missions Through the Universe So Far”.

By our count, there are 113 spacecraft in this image. It’s a catalogue of all of the vehicles launched into space so far, from the U.S.S.R’s Luna 2 in 1959 to the U.S.’s DSCOVR in 2015. Every orbiter, lander, rover, flyby, and impactor is here, along with its trajectory. It’s actually an image of a physical poster from PopChart Lab that any space maven could spend some quality time with.

Open another tab in your browser and click here for a zoomable version of the image. (If you’re on your phone, you may want to bookmark this and check it out when you’re near a big screen.)

(6) PROJECTS ON THE WAY. Natalie Zutter promises “(Almost) Every SFF Adaptation Coming to Television and Movie Theaters!)” at Tor.com.

Thanks to major properties like Game of Thrones and Marvel’s Cinematic Universe, we’ve entered a golden age of sci-fi and fantasy properties being developed for film and television. It seems that nearly every network and studio has snatched up the rights to old and new classics, with a bevy of projects in production or premiering in the coming months. To keep you on top of the latest news, we’ve updated our master list of every SFF adaptation currently in the works, from American Gods to Y: The Last Man. And surprising no one, prolific writers Neil Gaiman and John Scalzi each have a number of projects in varying stages of development.

Check out this list and get your DVRs and Netflix queues ready, because you’re going to be wonderfully busy for the foreseeable future.

(7) BAD NEWS. Andrew Porter reports that Ted White told members of a listserve that he has lost his son, Aaron, to suicide.

Aaron was Ted’s son with Lynda Spencer, who has since remarried, and is equally devastated.

Our darling son, Aaron died early Monday morning. He had been fighting depression and took his own life. We are so deeply devastated that we are having difficulty finding our way right now.

We’ve tried to contact many of you outside of FB, but there are so many of you that we want to know about our dear child that I’m taking to FB to share this horrible news.

We will let everyone know when and where the memorial service will be once we know the details.

Here is a photo of Ted and Aaron that was published earlier this year in the Falls Church News-Press. 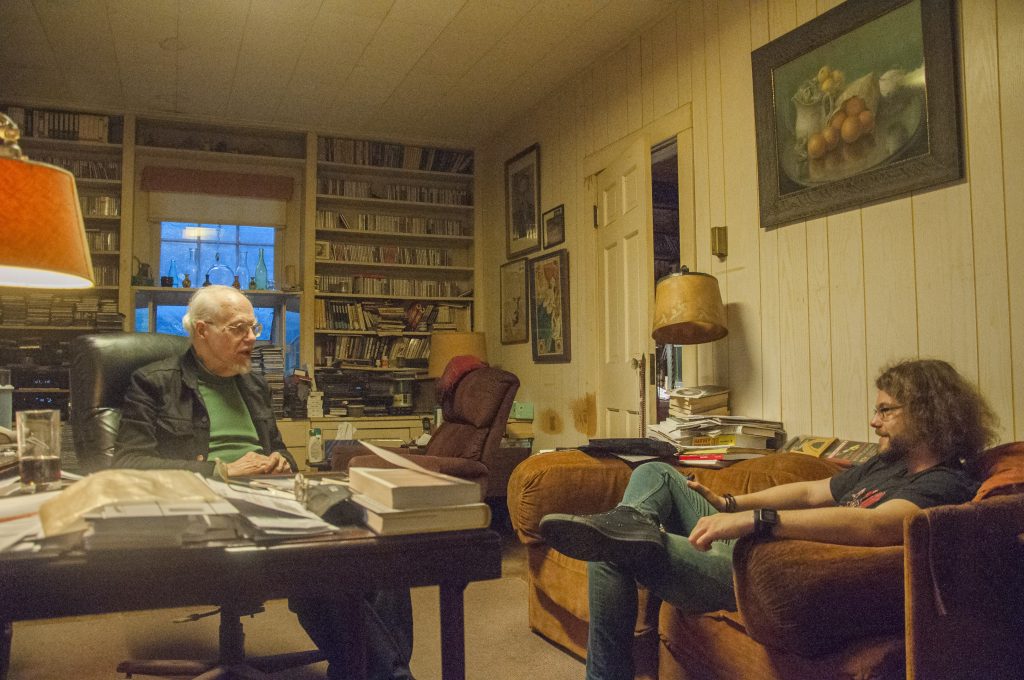 FALLS CHURCH RESIDENT TED WHITE (left) speaks with his son Aaron White in the living room of his house on Tuckahoe street. Ted grew up in the house and raised his children, including Aaron in the house. (Photo: Drew Costley/News-Press)

(8) VAUGHAN OBIT. Peter Vaughan, known to American audiences as butler William Stevens, the father of Anthony Hopkins’s character in Merchant Ivory’s film The Remains of the Day, and for five years as Jon Snow’s blind, scholarly mentor Maester Aemon Targaryen in HBO’s epic fantasy of Game of Thrones, has passed away at the age of 93.

This Christmas program, created more than fifty years ago now, shows that the “good old days” weren’t really that “good” to begin with. After all, Charlie Brown could plausibly lament the commercialization of Christmas as long ago as 1965, and Lucy could claim that the entire holiday was run by a “big Eastern syndicate”, and while Lucy’s claim was supposed to be mostly ridiculous, it was also supposed to be something that someone might actually believe. When Charlie Brown goes to buy a Christmas tree, the place that sells them is a gaudy showplace with spotlights, and almost all of the trees available are artificial. Even “back then” the world was commercialized, no matter what our hazy nostalgic gaze might tell us.

(10) DRAGON BREATH, Doris V. Sutherland, in “Dragon Awards Reviews: Horror, War and the Apocalypse” for Women Write About Comics, says the award-winning novels of Niemeier, Weber and Cole fall short of the mark.

A sequel to Brian Niemeier’s earlier novel Nethereal, Souldancer is one of the Dragon Award winners that benefited from Sad Puppy votes. It is primarily a space opera, making it an awkward fit for Best Horror Novel. Indeed, Niemeier acknowledges on his blog that the book was voted into this bracket for tactical reasons.

“I tip my hat to author and publisher Russell Newquist of Silver Empire,” he says, “who suggested Souldancer for the horror category, the only one where it wasn’t guaranteed to get annihilated.”…

Niemeier seems to view himself as working in the high-flying pulp adventure tradition of E. E. “Doc” Smith, but I do not recall Smith ever being this turgid. A closer comparison would be with Amazing Stories’ “Shaver Mystery” narratives, which, likewise, offered leaden mixtures of space opera and mythology. Now remembered only as curios, these were sold on the esoteric notion that they were true stories plucked from mankind’s racial memory.

Souldancer also has a distinct sales point. It is promoted on the grounds that, being written by a supporter of the Sad Puppies campaign, it somehow contains an essential sincerity and value that cannot be found in fiction from the SJW-dominated science fiction/fantasy/horror establishment. This marketing tactic will fail to attract anybody who is not already a convinced Puppy, of course. Should the Dragon Awards ever become a fandom institution, future generations will surely scratch their heads at how the first award for Best Horror Novel could have gone to this mediocre space opera.

(11) LITERARY BARTENDER. Nick Mamatas is co-editing Mixed Up: Cocktail Recipes (And Flash Fiction) For the Discerning Drinker (and Reader) with libations editrix Molly Tanzer, a volume forthcoming from Skyhorse in October 2017. He just posted the complete table of contents for the fiction element of the book.

Noreascon 2, the 38th Worldcon, was held in Boston in September 1980. This audio recording with images preserves/presents the Guest of Honor Speeches by Damon Knight and Kate Wilhelm. Toastmaster Robert Silverberg is entertaining as always, with long introductions and not a little hyperbole. Damon Knight’s talk is full of anecdotes including how “Fred Pohl saved my life” and other stories about the Futurians. Kate Wilhelm gives a more serious talk about the nature of our reality.

Featuring Jerry Pournelle, Arsen Darnay, Jim Baen, Karl T. Pflock, and Spider Robinson, this discussion is structured with the panelists describing their favorite future and then discussing and taking questions. The future visions range from the mystic to the moral to the technological. Jerry Pournelle moderates, with Jim Baen taking the editor’s role and commenting only.

We hope you enjoy this delightful clip of author Joe Haldeman, singing one of his most entertaining songs.

This video, “Know the Hotel Staff” made in “cooperation with the Institute for Transtemporal Fannish Studies”, was used as filler on the closed circuit video feed. Introduced by Dr. Dodd Clegler (a fannish reference old at the time), the film shows a time traveler interacting with various hotel staff as a training film for other travelers. It was created in the summer of ’76 by Minneapolis fans.

[Thanks to John King Tarpinian, Moshe Feder, JJ, and Andrew Porter for some of these stories. Title credit goes to File 770 contributing editor of the day Schnookums von Fancypants.]