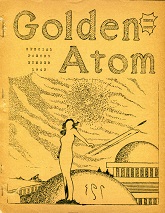 Larry Farsace, voted into the First Fandom Hall of Fame in 2012, died of cancer on January 9 at the age of 91. First Fandom’s newzine Scientifiction reported his passing in the Spring issue.

Farsace, who anglicized his name from Litterio B. Farsaci, was a child prodigy who gave lectures at the University of Rochester when he was 9 years old. As a teenager he was an avid magazine collector. He discovered fandom in 1935 after buying a year’s worth of Fantasy Magazine at a local bookstore. In the 1940s he was reputedly fandom’s top magazine collector after buying out the collections of two other oldtime Rochester fans.

He joined the Army and served overseas during WWII.

In addition to collecting, he published small bibliographies for early conventions and a zine called Fantastic for the first Worldcon. For a time he was a member of the Fantasy Amateur Press Association.

In 1939 he started The Golden Atom, a sercon fanzine named for Ray Cummings’ “The Girl in the Golden Atom”. The first ten issues were in letter-sized mimeographed format. Two special issues, appearing in 1955 and 1959, were done in letterpress. Harry Warner Jr. called the 1955 issue “the most expensive fanzine in history: 100 printed pages and lots of art in an edition of 1,200 copies at a cost of some $1,500.” Farsace’s 1959 issue had an identical budget and sold to fans for $1 a copy. Sam Moskowitz praised the early issues as “arguably the most valuable repository of new research and reference on SF.”