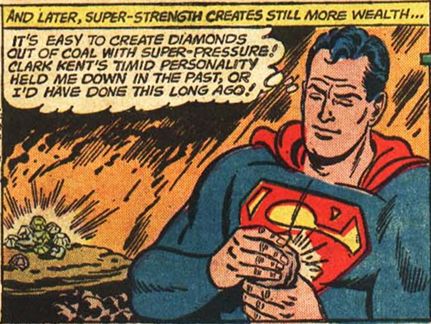 By James H. Burns: I used to love when Superman would take a lump of coal in his hands, and via super-pressure or some such, change it into a diamond! I hope this new discovery, doesn’t render such Kal-elian alchemy, moot!

A doctoral student noticed that the laser was either causing the graphite to disappear or turn semi-transparent. “The black coating of graphite was gone, but where did it go?” Cheng said. Subsequent research proved the graphite had turned into diamond. The Purdue researchers have named the process confined pulse laser deposition (CPLD).

The discovery has potential applications from biosensors to computer chips.