aka The Curs of Chalion

We’ve seen the same effect over and over again with people who comment on blogs (clears throat) both cultural and political, and even historical and that, no matter how often they’re proven wrong, keep coming back and stating the same thing they said in different words, as though that would make it true. They seem incapable of processing challenges, doubts, or even factual disproof of their charges.

Glamor. They’re under an enchantment. Something has affected them so hard, they can’t think, but can only repeat what they were told.

It’s not true, of course. Or not quite.

The enchantment of the “cool kids” is the glamor of social approbation and of opinions as positional goods.

People who have bought into an hierarchy of opinions, with some of the opinions “politically correct” no matter how factually wrong, have agreed to put themselves under the arbitrary power of others, and to subsume their reason and thought to them.

David Mack on The Analog Blog

Last August, I received an e-mail from a reader who was so offended by my inclusion of a same-sex relationship between a Vulcan woman and Klingon (disguised as human) woman in my novel Star Trek Vanguard: Harbinger that he swore off all my books forever. My public response, which I admit in hindsight was born more from passion than from reason, got noticed by a few sites.

When that post went wide, I expected to encounter some blowback and some criticism….For the most part, I deemed those uninformed responses unworthy of my attention or response.

Until this past weekend, I would have said the same about this piece by Amanda S. Green on the Mad Genius Blog: “Don’t break canon without good reason“.

For the impatient among you, here is a quick summary of her post: Amanda S. Green, an author and blogger who appears to have no professional experience writing or editing media tie-in fiction, tried to school me on the importance of adherence to canon when working in established universes, and on how I should have answered my homophobic critic.

Though Ms. Green provides absolutely no evidence to support her assertion, she accuses me of “breaking canon” vis-a-vis Star Trek for no reason other than to be “politically correct.” Her feeble attack on my professionalism and on my novel was published the day after my original post. Because Ms. Green did not mention me by name or link to my post, I didn’t learn of her essay until this past weekend, when a friend brought it to my attention…..

[Mack then analyzes the topic at length.]

Now, all this might seem to some folks like a lot of noise for very little signal. But I think it’s important to remember that as a nominee in the Best Fan Writer category, Ms. Green was offered the opportunity to submit self-selected examples of her work for the Hugo Voter Packet, to demonstrate which of her writings from 2014 show her to be worthy of taking home a Hugo award. That she chose to include the post I dissected above — an unresearched, factually deficient essay in which she lacks the basic courtesy even to name me as the author of the piece she tries (and fails) to deconstruct, never mind link to it so that readers can review the original materials and arrive at informed conclusions with regard to her arguments — speaks volumes.

I grew up knowing the Hugo awards stand for excellence in the broad and ever-changing field of science fiction and fantasy literature. Nothing I have seen in this essay from Ms. Green persuades me her work contains the insight or intellectual rigor that would make her worthy of being honored as a member of that longstanding tradition.

I also suspect she doesn’t know as much about Star Trek as she thinks she does.

I'm out of Nutty Nuggets

Few things mark you as a schmuck faster than attacking a master for being “old.”

But the second you start using his age and past accomplishments as a negative in your rhetoric. you mark yourself as a non-entity, a jackass, a pipsqueak, an ant shouting at a monument.

This sin, currently in evidence among some supporters of the Sad Puppies, is not exclusive to either end of the political spectrum.

Fans from the left wing thought they had reason to be upset at Mike Resnick and Barry Malzberg, a couple of years back, and though it was arguable that they had a case, it was downright appalling how many of them thought they were issuing slammers when they complained that these greats hailed from before their time, or were “old and irrelevant,” or, tellingly, “I never even heard of them!”

That controversy provided fuel for this one, where among things fans from the right wing are slamming David Gerrold for being old and senile and irrelevant and all those things he most assuredly is not.

In the past, I’ve asked these questions about the sad-puppy slate and the rabid-puppy slate:

1) Who are the horrible, no-good, terrible people who have conspired against the science fiction that has been “overlooked?” How have they conspired?

2) What are the qualities of storytelling that define excellence? How are these qualities recognized by the reader?

6) Which do you feel is more important in the award process — the excellence of the story or the political views of the author?

I’m not the only one posing these questions.

I thought that the Sad Puppies would quiet down between the nominations and the actual awards. Boy, was I ever wrong.

I’m sure I’m not the first person to try to tell you this, but the people who spew hot air about “warriors for social justice” are all over here with you. That’s not a thing people called themselves. It’s a pejorative made up to dismiss people, a la calling someone “PC patrol” or “feminazi” or “thought police”.

Some people have taken it as an ironic badge of honor or made geeky riffs on it (like “Social Justice Paladin” or “Social Justice Bard”), but by and large, you’re chiding people for not living up to the standards of a label that was foisted upon them in the first place.

Basing my assessment on these two submissions, Cordova has a future as an SF writer to be sure, and I enjoyed them both, but to me, his work does not rise to the level of previous Campbell winners such as Spider Robinson, C. J. Cherryh, Ted Chiang, Nalo Hopkinson, Cory Doctorow, Elizabeth Bear, Jo Walton, and others.

Obviously, I am very much impressed by these two novels. Chu easily passes my standard as a worthy candidate for the Campbell.

English has some definite writing chops, but I felt that there wasn’t a lot of variety in the pieces offered, which weakens my overall assessment of her as a Campbell nominee. I have already noted the similarities in protagonist choice. There are also structural similarities in the pieces, and I was irked in that I wanted to use the word “bittersweet” in describing all three stories. I think English has definite potential and I hope she continues to develop her craft.

Rolf Nelson and Eric S. Raymond did not submit any pieces [to the Hugo Voters Packet], but as there are samples of their writing in the Castalia House anthology Riding the Red Horse, submitted by the publisher in support of nominations of other pieces in the anthology, I read those in order to gain some sense of Nelson and Raymond’s work. I was not inspired by what was available to go searching for any more samples of either author’s work.

The eighth essay in John C. Wright’s Transhuman and Subhuman collection is a meditation on the merits of speculative fiction occasioned by SFWA making Gene Wolfe a Grand Master. “He is the greatest living author writing in the English language today,” Wright declares, “and I do not confine that remark to genre authors.”

“Sometimes in this life,” Wright says in regard to Wolfe’s accolade, “we see justice done.” If honors are rightly given to those who perform their duty, what obligations do SFF authors owe to their readers, to society at large, and to the truth itself?

Wright seeks the answer through a critical via negativa. What causes our disappointment–even outrage–when due honor is denied?

More thoughts on this year’s Hugo.

Freer’s been an ass to me, and incoherent at length to pretty much everybody, so no rocket for him. Green and Sanderson seem to not like SJWs like me, so I’ll return the favor. I’m a bit reluctant to give Mixon the award for an expose. Johnson at least restricts himself to book reviews, so my ballot is Johnson and no award.

I did not finish this novel. I abandoned it at about 25% in (and I am “proud” of having made it so far) but the book did not grab me and the writing is not good enough to keep me reading for the sake of the writing. If I have the time (and I probably won’t have the time) to get back to the book before voting on the Hugos closes, I will try to finish it. But only then.

This is a Sad Puppy and Rabid Puppy nomination.

It’s is an okay story about the basic training of AIs used in combat. The methods used are cruel, but the humans don’t care. They wall off the AI’s memories of pain and injury after training is complete, but in the case of Maggie, severe damage during combat allows her (she’s a she) to recall the training sessions. All the while she is accessing her memories, she is being investigated for scrap value, and she can see and hear the humans discussing her fate. It’s not a very new concept, but it’s handled well. It’s just so very long. It’s interesting to compare this with Steve Rzasa’s story, Turncoat, as the AI warships come to very different conclusions about humans.

Alexandra Erin at Blue Author Is About To Write 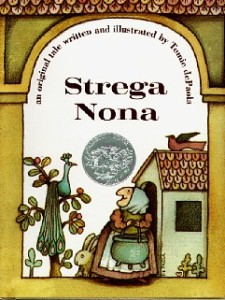 If you want chilling proof of the radical feminist lesbian witch cult (also known as “Social Justice”) that has infiltrated all ranks of society, look no further than this book which blatantly glorifies witchcraft, matriarchy, and the creation of a loyal slave nation of emasculated beta male cucks.

Exactly as foretold in a literal straightforward reading of the Book of Revelation, this book portrays a near-future world where even the Catholic Church itself is in thrall of a woman. The church is no longer the Bride of Christ but the scarlet woman of Babylon.

“Although all the people in the town talked about her in whispers, they all went to see her if they had troubles. Even the priests and the sisters in the convent went, for Strega Nona had a magic touch.” If that isn’t straight out of the Bible then I don’t even know what the Bible says. I do know that it says to not suffer a witch to live, not to treat her as a valued civic leader.

File 770 has proudly adopted a new motto on its website masthead: ‘”… the 770 blog, that wretched hive of scum and villainy …” – John C. Wright.’ Another satisfied customer!