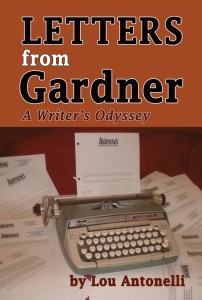 Prozine editors who plan on being around for awhile don’t just pan for nuggets in the slushpile, they spend a lot of time turning the dross into gold, too.

Gardner Dozois’ efforts along that line during his 20 years as editor of Asimov’s Science Fiction are represented in the 35 linear feet of letters and notebooks plus 35,000 e-mails that make up the archive of his correspondence and papers recently acquired by Riverside’s Eaton Collection. (For more details see the September issue of Inside UCR.)

Some of those letters went to author Lou Antonelli while he was trying to break into the sf field a decade ago.

Antonelli submitted 16 stories to Dozois before making his first sale. And Dozois retired after accepting “A Rocket for the Republic” in 2004.

Antonelli reproudces their correspondence in his book Letters From Gardner, recently published by Merry Blacksmith Press. He says, “I was the last person who ever went through this process with Dozois at Asimov’s, which is why I thought it needed to be chronicled.”

The book also explains the revisions Antonelli made to his stories as a result of Dozois’ input, making it a writer’s manual as well.

Strangely enough, all except one of those 16 stories were published in other venues, though it’s easy in hindsight to understand why Dozois invested the effort. So far in Antonelli’s career he has had 85 short stories and three collections published around the globe.