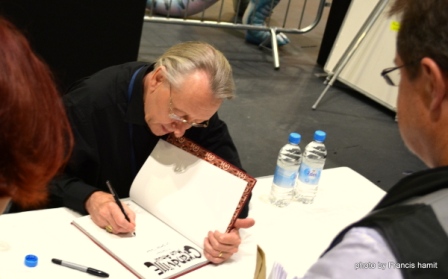 By Francis Hamit: At the Press Briefing before LonCon3 officially started, the Artist GoH, graphic novelist Bryan Talbot, said that being selected made him feel as if his art had finally moved beyond being considered mere “comic books” to being “literature”. He is quite well known in the UK, and the subject of a recent documentary The Graphic Novel Man: The Comics of Bryan Talbot. This hour-long presentation was shown on the fourth day of the convention and it seemed to me that not only had his art evolved into a form of literature, but a way to put cinema on paper. His subsequent lecture the same afternoon demonstrating the wide range of techniques and graphic devices confirmed this. He laid out the various ways to format a page so that the reader’s eye is easily led through the images and text that comprise the narrative.

About the creative process, Talbot said, “When I get an idea, the first thing I do is write it down. Then I create a ‘bible’ for the graphic novel in a loose-leaf notebook so that I can move between the sections and make notes. Research is next, as I reference images and create ‘mind maps’ as a useful way of working through complete scenes and getting the order of scenes.

“Structure is very important. I chart the scene progression so that you can see the whole story, scene-by-scene, and the number of pages needed to tell the story. I create layers from the photo references as a basis for the individual panels, and add details. I make rough sketches that pre-planned of papaer are a mixture of words and pictures, so that the story changes at the right instants. Each moment is a moment in time. I choose which instants is needed to break the scene.

“The script is next, it is a page number and panel number description, which the editor approves; I then polish and improve the dialogue. A complex scene requires a description of when things are taking place as well as where.

“The layout can be on a grid or freestyle. Freestyle melds panels into a collage of images. Grid panels provide a ‘proscenium arch’ that you can look through, proportionate to the page. The Golden Mean (2 to 3) is used in American comics. Freestyle layouts let you have lots of open space.

“The placement of text and speech balloons is critical. It is vitally important that the reader not read them in the wrong order. Double-page layouts must form a whole. The pages have to work together and be harmonious. The palette is important, as a historical reference. We give each scene a different ambient color, and use composition lines to lead the reader’s eye from one panel to the next.”

I found this presentation extremely interesting because I’m not really up on comic books or graphic novels. Since I am in the middle of collaborating on a motion picture, I see the parallels between this and cinema. Part of our process is what is called ‘storyboarding’, where shots are planned in advance on paper. Graphic novels intrigue me because they are the dominant form in many other countries with huge audiences, such as India, China, and Japan.

Bryan Talbot has a PDF of his lecture on his website and it is something that even text-bound dinosaurs like myself would do well to read.