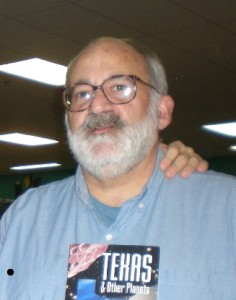 Prolific sf writer Lou Antonelli has been hired as the new managing editor for C-Spot magazine. The mission of C-Spot is to promote and showcase undiscovered Texas writers, artists, and musicians.

Antonelli is already making an impression – here’s the lede from his story trumpeting next weekend’s Nacogdoches Film Festival:

Deep in the Piney Woods of East Texas, Nacogdoches is hosting its annual Film Festival Feb. 26–28. Perhaps the best-known special guest is George R.R. Martin, writer and producer of the popular “Game of Thrones” books and television series.

Lansdale said he’s been friends with Martin ever since they were newbie authors in 1970s (Martin was a science fiction author then).

In addition to many published stories, Antonelli’s resume includes a stint as the managing editor of the Clarksville (TX) Times, and serving as secretary of the Society for the Advancement of Speculative Storytelling (SASS). He also recently produced Letters From Gardner, a book of correspondence about being mentored as an sf writer by Asimov’s editor Gardner Dozois.