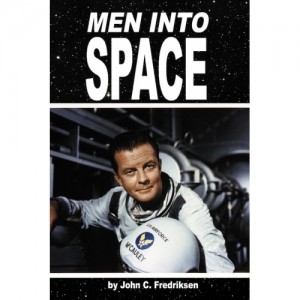 Steve Davidson gave a glowing review to Men Into Space by John C. Frederiksen on the Amazing Stories blog. Men Into Space was the late-1950s hard science fiction adventure series that in the eyes of pre-teen Mike Glyer took up where the space exploration episodes of Disneyland left off.

Publisher Bear Manor Media’s description is in synch with my memory of the show’s only season:

Popular actor William Lundigan appeared as the redoubtable Colonel Edward McCauley, who grappled with many of the same problems that real astronauts encountered in their quest to reach the Moon a decade later. It was a somber departure from previous televised science fiction fare, aimed at juveniles, and served up the drama and excitement of space flight in realistic fashion.

In 38 black-and-white episodes, McCauley endures lunar crashes, renegade satellites, runaway space stations, meteor strikes, and colliding tankers, in addition to memorable encounters with feuding scientists, balky subordinates, hostile cosmonauts, and space babes. All told, Men Into Space is a classic slice of 1950s Americana and exuberantly reflects the national obsession with astronautics of its day. It is a must for devotees of the heroic age of spaceflight and early science fiction television.

Davidson praises all aspects of the book, especially its episode summaries —

Where Men Into Space really shines though is John’s presentation of all 38 episodes. With loving detail and an evident encyclopedic familiarity with each one, Frederiksen lays out the action, the conflict, the personalities and the emotion in a page-turning, exciting and completely engaging manner; the closest comparison I can find to his semi-fictional presentation are James Blish’s Star Trek (TOS) episode novelizations.

7 thoughts on “Men Into Space: A History”