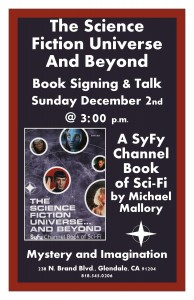 Pop culture writer Michael Mallory will sign his latest book, The Science Fiction Universe…and Beyond: A SyFy Channel Book of Sci-Fi, at Mystery & Imagination on December 2 at 3:00 p.m.