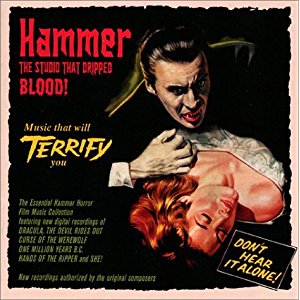 Creating the symphonic pulse quickened by luminaries Peter Cushing, Christopher Lee, and the lovely Veronica Carlson in such films as Horror of Dracula, Curse of Frankenstein, Dracula Has Risen From The Grave, Frankenstein Created Woman, Taste The Blood of Dracula, Frankenstein Must Be Destroyed, Scars of Dracula, and She (Who Must Be Obeyed), as well as Hammer’s groundbreaking 1950’s science fiction masterpieces, The Quatermass Experiment, Quatermass 2, and X, The Unknown, James was a joyous, symphonic force of nature. Jimmy and I became close friends in the last years of his life, and I loved him.

Producer James Fitzpatrick at Tadlow Records has just announced that he will be recording two of Jimmy’s most spectacular scores, presumably Horror Of Dracula, and Curse Of Frankenstein, both created by Hammer Films, and starring the wonderful Peter Cushing and Christopher Lee, for a whole new generation of film music enthusiasts.

These two pieces look back at the frighteningly haunting, and prolific career of composer James Bernard.

Jimmy and I became close friends in the last years of his life, and I loved him. Here is a short documentary film remembrance of our friendship, and of the frighteningly prolific career of composer James Bernard. It is a melancholy tribute to a legendary artist and composer.

While science fiction in cinema has always enjoyed enormous popularity around the world, dating back to George Melies 1902 experimental short A Short Trip To The Moon, few would argue that the cultural renaissance of the well worn genre occurred during its most prolific flowering from 1950 until 1959.

In June 2014, cinema archivist / historian / educator Steve Vertlieb took time before our documentary cameras to reminisce on his special friendship with legendary film composer – the late great James Bernard, best known to many as the primary musical voice of the classic 1960’s era horror and sci fi films of England’s Hammer Studios…