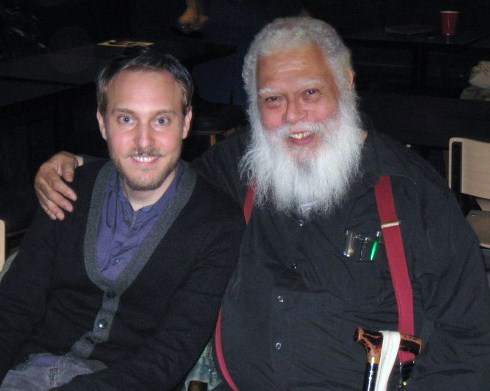 By Mark L. Blackman: Disclaimer: The pun in the title is Jim Freund’s. However, reading it as “Salmon-Chanted Evening,” I mused “Fish and Chip.” They readers were also at one point referred to by an audience member as “Sam One” and “Sam Two.”

The night of Tuesday, April 21, 2015 (Earth Day Eve) was “Sam-Enchanted Evening” as the New York Review of Science Fiction Readings Series presented the sort-of-similarly-named duo of Samuel R. “Chip” Delany and Sam J. Miller. The event was held at the Series’ outlying alternate venue, The Brooklyn Commons, a hall in Brooklyn about a mile from the Barclays Center, and hosted by producer/executive curator Jim Freund, host of WBAI-FM’s Hour of the Wolf radio program on sf and fantasy.  (The show broadcasts and streams every Wednesday night/Thursday morning from 1:30-3:00 am. WBAI’s offices are a couple of floors above and the studio is soon being relocated there.)

Things were more chaotic than usual as The Commons was undergoing a renovation, and unrecognizable from the last NYRSF reading held there, in December. One improvement was the addition of a café. Seating, though, at least that evening, was less than optimal, with the audience sitting along the sides, few facing the readers. (We are assured that this will be resolved shortly.) Another was that the main space has been converted for all forms of multimedia and that last night was a test run, utilizing the three robotic cameras (operated, in a baptism of fire, by Terence Taylor). Welcoming the audience, Freund informed (warned?) us that we were on Livestream (for those who missed it, the event may be viewed here).

This is, he continued, the first of three consecutive Tuesday readings here. Next week, Tuesday, April 28, rather than a NYRSF reading, there will be a special Hour of the Wolf night featuring Robert Shearman (more on that below), and on Tuesday, May 5 (Cinco de Mayo), two women who are helping shape the future of sf, N.K. Jemisin and Sheree Renée Thomas. The June 2 readings will be back at their more usual venue, the SoHo Gallery for Digital Art (aka Gallery La La) on Sullivan Street in Manhattan, with Ron Hogan as guest curator, and Lev A.C. Rosen and Adam Sternbergh reading. Down the line, the next (the 25th) season of NYRSF Readings will, he hoped, be funded by a Kickstarter campaign. He then introduced the first-reading Sam.

During the intermission, and after much autographing and many, many selfies, a raffle was held for two flashdrives. The first featured WBAI’s original radio drama production of Delany’s “The Star-Pit” (fondly recalled by Freund from his first days at WBAI) and the second (donated by John Joseph Adams and Skyboat Media [Stefan Rudnicki], which produced the podcast readings) a copy of Miller’s “We are the Cloud” (not pared-down) and “57 Reasons for the Slate Quarry Suicides” (his Shirley Jackson Award-winning story) plus their podcasts. Freund then elaborated on next week’s Hour of the Wolf Live event, an evening with Robert Shearman, who is probably best-known here as the writer of “Dalek,” a pivotal episode in the revived series of Doctor Who, and a nominee for the Hugo Award for Best Dramatic Presentation, Short Form. The guest host will be Ellen Datlow (whose suggestion it was).

Freund introduced the second reader of the evening, Samuel R. “Chip” (rather than “Sam”) Delany, “one of the greatest writers in the world.” Delany has won four Nebula Awards, two Hugo Awards, the Stonewall Book Award, and the J. Lloyd Eaton Lifetime Achievement Award, been named Grand Master by SFWA (the Science Fiction and Fantasy Writers of America) and inducted into the Science Fiction and Fantasy Hall of Fame, and invited to be Guest of Honor at innumerable science fiction conventions.

Before reading from his most recent (2012) novel, Through the Valley of the Nest of Spiders, Delany convulsed the audience by sharing a bad, and bombastically condemning, review of the book that excoriated it for its “heatedly and graphically … [and] outrageously gratuitous sex” (citing among its perverse proclivities drinking from condoms and “nude nose-picking”). He read from Chapter 90, a missing (through no fault of his or the publisher’s) chapter. The novel centers on two working-class gay men, Eric (who reads and rereads Spinoza’s Ethica) and Shit (a nickname back from when he was called “a little shit”), who have been together since they met at 17 and 19, respectively; it’s 2059 and they’re now 76 and 78, working on an island as handymen. To our disappointment after that buildup, the chapter was PG-13 clean and totally devoid of nude nose-picking.

Ellen Kushner came up for “a PSA,” announcing the planned publication of the book Stories for Chip, a tribute to what he’s done and what he’s meant to us; it’s being funded by a Kickstarter campaign. (Visit https://www.indiegogo.com/projects/stories-for-chip-a-tribute-to-samuel-r-delany.)

Delany was overwhelmed by the warmth of the reception, which included a standing ovation.

As customary at these Readings, the Jenna Felice Freebie Table offered giveaway books, and refreshments (cider, cheese and crackers).