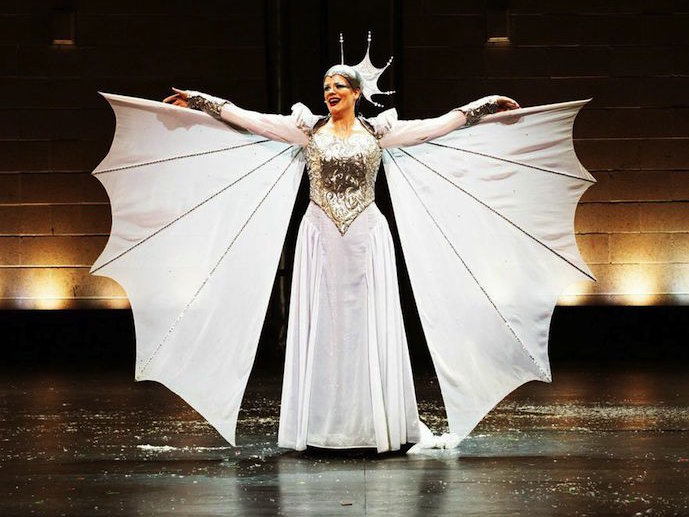 I’ve loved classical music for as long as I have loved science fiction. So when I saw a flyer for Operacon at Capclave, I knew I had to go, and I was very glad I did. This was an excellent small convention and I had a very good time.

Dick and Leah Zeldes Smith organized Operacon so that fans could get together and attend The Snow Dragon, an opera by Somtow Sucharitkul that premiered at the Skylight Theatre in Milwaukee in March. Attendees received a ticket to the opera, a copy of the libretto signed by Somtow and artist Mikey Jiraros, and admission to a very well run consuite run by Alan Rosenthal and Jeanne Bowman.

Even though Operacon was small, we had most of the features of larger conventions. There was a dealer’s room, run by Greg Ketter. Leah Fisher brought a bag full of games, and some of us spent a pleasant evening playing Yahtzee and Clue.

Attendance was about 60, of whom half were from the Chicago or Milwaukee areas and the rest from all parts of the country. There was one international attendee, British journalist Michael Proudfoot, on assignment for opera magazines in Great Britain and Germany. Two Canadians tried to come, but were thwarted by bad plane connections.

Among the attendees was Elizabeth Anne Hull of Palatine, Illinois, Fred Pohl’s widow. I had several long conversations with Hull, and told her how much I enjoyed Pohl’s novel Narabedla Ltd., a 1988 work in which aliens kidnap second-tier opera singers and have them perform to appreciative aliens who love opera but can’t replicate human voices. Hull explained that she and her husband had been subscribers to the Chicago Lyric Opera for many years, and she still is an avid opera and theatregoer to events in the Chicago area.

We even got into some highly specialized topics. I had a good discussion about Regietheater, where egomaniac European directors think any operas can be improved with the addition of gorillas and nudity. I even had a discussion with a fellow oldphart about the great Milton Cross, the Vin Scully of opera broadcasters, who was the host of the Metropolitan Opera broadcasts until his death in 1975.

Somtow Sucharitkul arrived with an entourage of five, including a personal assistant and his mother, Thaitow. Somtow has not been to a science fiction convention since L.A.Con III in 1996, because he isn’t a science-fiction writer any more. He is a composer, conductor, and creator and manager of the Siam Philharmonic and Bangkok Opera. Somtow has written five symphonies and nine operas; his most important operas include Mae Naak (2003) the first grand opera based on Thai themes, and the Japanese-inspired Dan No Ura (2012). When Somtow began composing, his work was brutal and atonal. But after a spiritual crisis in 2001 (which led to his becoming a Buddhist monk for an extended period), he decided to become a “neo-Asian, neo-romantic” composer.

One afternoon, Somtow told stories about his life in Thailand. He prides himself on introducing Gustav Mahler’s symphonies to the Thais. (The performances are on YouTube.) His efforts led him to receive a treasured relic from the International Mahler Society — the baton Leonard Bernstein had used the last time he had conducted Mahler. The baton, Somtow noted, had yellowed, because of Bernstein’s decades of chain smoking.

Somtow also told about the time he tried to bring an elephant for a performance of Aida. He didn’t know that elephants in Bangkok had to be licensed, and was surprised when the pachyderm police showed up and arrested the elephant, taking him to the elephant impoundment lot or wherever it is that unlicensed elephants in Bangkok go. The resulting performance of Aida was elephant-free.

Fandom assembled for the March 13 premiere by going to the Milwaukee Ale House for a good old Wisconsin Friday fish fry. Then we went to the Skylight Theatre.

We were encouraged to dress up for the event, and about half of us did. Amy Axton, for example, showed up in full steampunk regalia, including goggles, a blaster, and various pieces of watches used for decoration. But the clear winner in the costume contest was Greg Rihn, whose outfit replicated a famous one worn by Giuseppe Verdi, including top hat, tails, a cane, a long flowing white scarf, and a white waistcoat underneath his tux. It was a magnificent effort, and Rihn seemed a time traveler from the sunny part of the past where it is always 1895.

The Skylight Theatre is a very pretty place that seats about 500. It has three tiers and curved light-brown walls. The theatre was meant to be a pastiche first of the nearby Pabst Theatre, second of nineteenth-century opera houses generally. The architects did a very fine job.

The fans were introduced to the crowd. The management also knew what fans liked, and we all enjoyed the little bags of chocolates given us as a present.

The opera is based on Somtow’s short story “The Fallen Country,” which he later expanded to a YA novel. Billy Binder is the victim of an abusive stepfather, who at one point beats him so badly he goes to the hospital. Dora Marx, a social worker who quickly recognizes that Binder is a victim of child abuse, treats him. To mentally escape his plight, Binder, with the Snow Dragon as his guide, uses his anger to travel to The Fallen Country, ruled by the Ringmaster, an avatar of his stepfather who uses a whip instead of a belt. The Fallen Country is a land of perpetual emotional and physical cold. Can Binder beat the Ringmaster—and use his victory in an imaginary world to fight back against his stepfather in our world?

The cast was all good, but 12-year-old Luke Brotherhood as Billy Binder was excellent. The Snow Dragon was played by Cassandra Black, a Wagnerian soprano in good voice. Her costume was a silver lame dress, complete with a bustle, silver boots, and a helmet with spikes and bells. The women I talked to admired Black’s dress and said that costumers would faunch after it.

As for the music, I asked Michael Proudfoot, the British music critic. He detected traces of Richard Strauss’s Ariadne auf Naxos and Der Rosenkavalier, and thought the trio that concludes The Snow Dragon was very Straussian. But he also saw a lot of Benjamin Britten in Somtow’s work, particularly The Turn of the Screw. Somtow wrote in the program notes that many of Dora Marx’s arias were atonal, symbolic of Marx’s Freudian beliefs.

After the opera, there was a post-concert reception, and I saw Thaitow Sucharitkul sitting quietly at a table. “You must be very proud of your son,” I said.

Mrs. Sucharitkul smiled. “I am,” she said.

The following day there was a discussion of the opera with Somtow and Skylight Artistic Director Viswa Subbarman. I missed the discussion, because I was in Milwaukee, and I had to drink beer.

That evening Dick and Leah Zeldes Smith held a special reception honoring their 30th wedding anniversary. They had Kiddush cake, a Jewish delicacy, and a special cake congratulating the Smiths on their anniversary. Of course the cake had a snow dragon on top.

Somtow showed up briefly, as he had given talks at a performance that night and had to prepare for a matinee the next day. But he decided to bring his personal copy of The Laughing Dead, a 1989 gorefest that Somtow wrote, directed, provided the music for, and acted as Dr. Um-Tzec, a villain who cackles, ”I want to bring a new age — of death!”

Somtow suggested we look at the reviews on Amazon, and the critics there had such comments as “very clumsy and slow,” “this movie is so, so bad” and “Amazon really needs to add minus numbers to the ratings.” These critical comments are quite accurate. The film is best known for the large number of pros in the cast, with Tim Sullivan in the lead, with substantial supporting roles for Gregory Frost as a tourist and Ed Bryant as a bus driver. Those of us who think of Ray Ridenour as a debonair Baltimore fan will be surprised to see him here wearing a tacky yellow leisure suit. A lot of other pros showed up to play corpses and zombies, including Tim Powers and Forrest J Ackerman, who can be glimpsed for two seconds near the film’s conclusion.

How could one man write The Snow Dragon and The Laughing Dead? I’ve known Somtow for 35 years and I don’t know the answer to this question. The paradox of Somtow Sucharitkul is that a man who can write arias fit for the gods once had feet of cheese.

The Snow Dragon is an important artistic achievement and Operacon was one of the most pleasant weekends I have ever had in fandom.