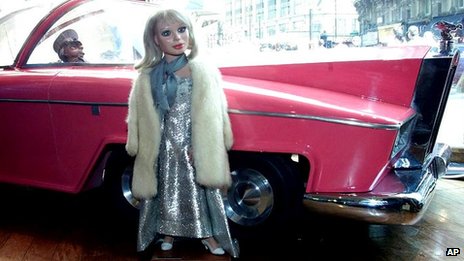 Lady Penelope and Parker from Thunderbirds.

David Graham will be the only original cast member returning in the new production of Thunderbirds Are Go!

He’ll be the voice of Parker, chauffeur of Lady Penelope’s pink Rolls Royce. Rosamund Pike will be Lady Penelope.

ITV will air 26 episodes in 2015. The show will use a mix of CGI animation and live-action miniature sets. ITV first aired the original series in 1965.

Graham, besides collaborating on several other Gerry Anderson series, was one of the first voices of the Daleks in Doctor Who. In the “1984” TV advertisement made to introduce the Apple Macintosh, he played the role of Big Brother.

A curious coincidence is that 2013 happens to be the character Parker’s year of birth.