(1) A Tokyo department store is offering a $91,000 solid gold figure of the alien Baltan, a villainous monster from Japan’s superhero Ultraman TV series. The perfect accessory to go with the 2007 Hugo base, except none of the winners I know can write the check! (2) Stephen Fabian, among the most gifted illustrators ever, and whose professional career was capped by multiple Hugo nominations and a World Fantasy Life Achievement Award (2006), has put his gallery online. StephenFabian.com contains 500 drawings and paintings that he did for fan and professional publications beginning in 1965. Fabian includes autobiographical comments about each drawing or painting. For example, appended to his notes on the drawing “Born to Exile”:

And the greater wonder of it is, for me, that every once in a while I receive a surprise gift from a fan in appreciation of my artwork. In this case a fan sent me a beautiful copper etching that he made of my drawing that you see here, and that etching hangs on the wall in my drawing room. Other surprise tokens of appreciation that I’ve received from fans are; a miniature spun glass ship, a knitted sweater with an artist’s palette worked into the chest area, a neatly carved wooden figure of a “Running Bear,” that came from a missionary preacher in New Zealand, a fantasy belt buckle, and a miniature paper-mache sculptured “gnome” that keeps watch over me. I cherish them all, they give form and reality to that wonderful feeling of appreciation that comes from the heart. 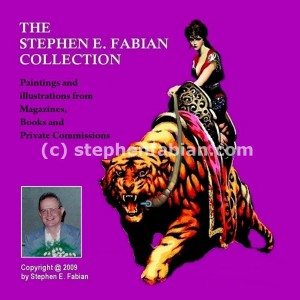 (3) Enter a selfie by tomorrow for a chance to win a box of “Marshmallow Only Lucky Charms”.

General Mills announced the “unicorn of the cereal world,” Marshmallow Only Lucky Charms, is finally a reality — but there are only 10 boxes.

The cereal maker said the 10 boxes of Marshmallow Only Lucky Charms will be given out as prizes in the “Lucky Charms Lucky Selfie” contest, which calls on participants to post pictures of themselves holding “imaginary boxes of Lucky Charms” on Facebook, Twitter or Instagram using the hashtag, “#Lucky10Sweepstakes.”

Entries must be posted by Oct. 18, the company said.

(5) Then, Game of Scones is a Gollancz Cake Off with Jammy Lannister and fantasy authors AK Benedict, Edward Cox and Sarah Pinborough competing for the Iron Scone.

I dream of the day that I’m libelled quoted by Mike on File770. Of course first I guess I’ll have to start a blog of some description.

I notice there is a lot of competition in the comments for the honor of being Santa Claus, but how many others can fix this up for you? While saving the internet from another blog? Merry Christmas!

(7) Mark Kelly journals about his Jonny Quest rewatch – a show that was a big favorite of mine as a kid.

So: the show is about Jonny Quest, his father Dr. Benton Quest, a world-renowned scientist, Quest’s pilot and bodyguard “Race” Bannon, and their ‘adopted son’ Hadji, an Indian boy who saved Dr. Quest’s life while visiting Calcutta. The episodes involve various investigations by Dr. Quest, who seems to have a new scientific specialty each week (sonic waves one week, lasers another, sea fish another, a rare mineral to support the space program on another) or who is challenged by alerts from old friends (a colleague who is captured by jungle natives) or threats from comic-book character Dr. Zin (via a robot spy, etc.)

(8) Accepting submissions – No Shit, There I Was —

Who We Are: Alliteration Ink is run by Steven Saus (member SFWA/HWA), focusing on anthologies and single-author collections, with over a dozen titles across two imprints.

Rachael Acks is a writer, geologist, and sharp-dressed sir. In addition to her steampunk novella series, she’s had short stories in Strange Horizons, Waylines, Daily Science Fiction, Penumbra, and more. She’s an active member of SFWA, the Northern Colorado Writer’s Workshop, and Codex.

Who: This will be an open call. All who read and follow the submission guidelines are welcome in the slush pile.

When: Rachael wants stories no later than 6 Jan 2016. No exceptions will be made. The Kickstarter will occur after the table of contents has been set.

What We Want From You:

All stories must begin with the line, No shit, there I was. It can be dialog or part of the regular prose.

John King Tarpinian says, “Hope they do not screw this up.”

I’m not completely reassured, because when I checked the SyFy Youtube channel today, this was the first video they were hyping —

October 17, 1933: Physicist Albert Einstein arrived in the U.S. as a refugee from Nazi Germany.

(11) Congratulations to frequent commenter Laura “Tegan” Gjovaag on her award-winning photo in the Better Newspaper Contest sponsored by the Washington Newspaper Publishers Association.

DSN reporter Laura Gjovaag came away with the Sunnyside newspaper’s only first-place award. She won the top award in the black and white sports photo action, or feature, category. The photo of Lady Knight softball player Jenna den Hoed appeared in the May 20, 2014 issue, and beat out all entries in the category submitted by all four circulation groups.

The problem is that more and more — and unexpectedly — I run up against this type of thought in places I don’t expect.

We ran into it a lot over the puppy stuff.  No matter how many times we told them we were in it for the stories, and because our story taste was different from theirs, they kept thinking magically.  It went something like this “We’re good people, and we’re for minorities.  So if these people don’t like the same stories we do, they must be racist and sexist.”

This was part of the nonsense that started Gallo’s flareup.  She had some idea we’d get all upset at TOR publishing Kameron Hurley’s book.  Because you know, we have different tastes than those primarily on the left who controlled the Hugos so long, so we don’t want them to … get published?

This only makes sense if the person saying it is inhabiting a magical world, where objects/people of certain valences are played against each other like some kind of card game.

This is not real.  I mean sad puppy supporters might not — or might, I won’t because it’s not to my taste, but — read Hurley’s book, but we won’t recoil from it like a vampire from a cross.  A Hurley book doesn’t magically cancel out a Torgersen book.  Or vice versa.

On the good side, at least on that level, our side doesn’t act like that.  We don’t say “ooh” at a new Ringo book because “Oooh, that will upset those liberals”  we say “oooh,” because we’ll get to read it.  Books are books and people are people, not points in some bizarre game.

(13) Umair Haque says he can explain “Why Twitter’s Dying (And What You Can Learn From It)”.

Here’s my tiny theory, in a word. Abuse. And further, I’m going to suggest in this short essay that abuse?—?not making money?—?is the great problem tech and media have. The problem of abuse is the greatest challenge the web faces today. It is greater than censorship, regulation, or (ugh) monetization. It is a problem of staggering magnitude and epic scale, and worse still, it is expensive: it is a problem that can’t be fixed with the cheap, simple fixes beloved by tech: patching up code, pushing out updates.

To explain, let me be clear what I mean by abuse. I don’t just mean the obvious: violent threats. I also mean the endless bickering, the predictable snark, the general atmosphere of little violences that permeate the social web…and the fact that the average person can’t do anything about it.

We once glorified Twitter as a great global town square, a shining agora where everyone could come together to converse. But I’ve never been to a town square where people can shove, push, taunt, bully, shout, harass, threaten, stalk, creep, and mob you…for eavesdropping on a conversation that they weren’t a part of…to alleviate their own existential rage…at their shattered dreams…and you can’t even call a cop. What does that particular social phenomenon sound like to you? Twitter could have been a town square. But now it’s more like a drunken, heaving mosh pit. And while there are people who love to dive into mosh pits, they’re probably not the audience you want to try to build a billion dollar publicly listed company that changes the world upon.

(15) “(Give Me That) Old-Time Socialist Utopia: How the Strugatsky brothers’ science fiction went from utopian to dystopian” by Ezra Glinter at The Paris Review.

Since they started writing in the mid-1950s, the brothers published at least twenty-six novels, in addition to stories, plays and a few works written individually. According to a 1967 poll, four of the top ten works of science fiction in the Soviet Union were by the Strugatskys, including Hard to Be a God in first place and Monday Begins on Saturday (1965) in second. For at least three decades they were the most popular science-fiction writers in Russia, and the most influential Russian science-fiction writers in the world.

Their popularity wasn’t without political implications, however. Later in their lives, the Strugatskys were characterized as dissidents—sly underminers of the Soviet regime. In its obituary for Boris, who died in 2012 (Arkady died in 1991), the New York Times called him a “prolific writer who used the genre of science fiction to voice criticisms of Soviet life that would have been unthinkable in other literary forms.” This is mostly true­—their work did become critical and subversive over time. But at the beginning of their career, the Strugatsky brothers were the best socialist utopians in the game.

Briefly, and in October it’s almost mandatory, particularly for a lifelong horrorist such as myself, to deal with something eldritch, but I’ve finally read the August Derleth-annotated transcript of a symposium recorded on 24 October 1963 at the Los Angeles Science Fantasy Society, a discussion of Lovecraft and his influence featuring a panel including Robert Bloch, Fritz Leiber, writer Arthur Jean Cox, Sam Russell, and Riverside Quarterly editor Leland Sapiro, along with some comments and questions from the audience. Given that Bloch and Leiber were both helped and influenced by Lovecraft early in their careers and were the two most important exemplars of how to take his model for approaching the matter of horror fiction and improving upon it, it’s useful, if not as comprehensive here as one could hope, to see how they thought about that influence and their respective takes on Lovecraft’s work and legacy. Bloch unsurprisingly seems most taken by the interior aspects of what Lovecraft was getting at in his best work, the questions of identity and madness and usurpation from within; Leiber, also not too surprisingly, is at least as engaged by the larger implications, philosophically and otherwise, of humanity’s not terribly secure foothold in Lovecraft’s universe. The notion that such non-fans of Lovecraft as Avram Davidson and Edmund Wilson had more in common with him than their experience of his work led them to believe is briefly if amusingly explored. Not as significant as some of Leiber and Bloch’s other considerations of Lovecraft, but useful to read, and one’s suspicions of what August Derleth made of what he was transcribing and annotating, particularly when it touches on his own involvement with Lovecraft’s body of work, are mildly telling.

Click the link for a copy of the symposium transcript [PDF, 24 MB file]

(17) Pixar’s The Good Dinosaur is due in theaters November 25.

(18) If you click through the newly released archive of Apollo photos quickly enough you get something like stop motion animation.

[Thanks to Will R., Andrew Porter, Harry Bell, Karl Lembke, and John King Tarpinian for some of these stories. Title credit goes to File 770 contributing editor of the day Peace Is My Middle Name.]