(1) DYSTOPIAS SELL LIKE INFERNAL HOTCAKES. The Washington Post’s Ron Charles notes that sales of dystopian novels, including Fahrenheit 451, Brave New World, and The Handmaid’s Tale, are soaring under a Trump presidency.  He interviews Orwell biographer Gordon Bowker about what 1984 (Amazon’s #1 bestseller) tells us about a Trump administration.

President Trump may not be a big reader, but he’s been a boon for sales of dystopian literature. Amid our thirst for adult coloring books and stories about missing girls and reincarnated puppies, some grim old classics are speaking to us with new urgency. Ray Bradbury’s “Fahrenheit 451 ,” Aldous Huxley’s “Brave New World ” and Margaret Atwood’s “The Handmaid’s Tale ” have all risen up the latest paperback bestseller list.

But by far the greatest beneficiary of our newly piqued national anxiety is George Orwell’s “1984.”

Soon after senior adviser Kellyanne Conway said on Sunday that the administration was issuing “alternative facts,” Orwell’s classic novel spiked to No. 1 on Amazon.

And if you prefer an autographed leatherbound copy of Bradbury’s Fahrenheit 451, eBay has one on sale this week.

Alternate history can be a thrilling, but daunting, subgenre of science fiction, fantasy, and horror to dive into; there are seemingly endless possible “what-if,” timeline, and story combinations for readers to try. This month, Mind Meld asks writers:

What is your favorite alt-history novel?

What about the author’s treatment to the particular time period and story made you fall in love? What about the alt-history subgenre draws you in, as an author or a reader?

(3) STARS AND STRIPES. Jack Clemons tells the story of the late “Gene Cernan And The Last Flag On The Moon” at Amazing Stories.

Before Cernan and his fellow moonwalker Harrison Schmitt finished their final moonwalk, as a salute to the Apollo Program and a reminder to others of where we came from and how far we could go, Cernan positioned his camera so that Schmitt and the American Flag were framed in the black sky with the flag pointing to the distant blue Earth. Cernan’s own reflection can be seen in the visor of Schmitt’s helmet.

(4) WEREWOLF, THERE CASTLE. Here’s fan love for you – someone made Larry Correia a 50-pound “Bronze Statue of Earl Harbinger from MHI”. See photo at the link.

Devon Dorrity is a fantastic sculptor, He likes to listen to Audible while working, and had gone through the MHI series a couple of times. Alpha inspired him to create this.

(5) OVERFEASANCE. While we’re still flailing to catch up with last year’s award-worthy fiction, Jason has already evaluated this month’s new stories from semiprozines and other free sites in “Summation of Online Fiction: January 2017” at Featured Futures.

(6) PRINCE OBIT. Sarah Prince, a longtime fan who started receiving File 770 in 1978, passed away at the beginning of the week. Exact details are not immediately available – she was found when a friend asked someone to check on her.

Prince was a talented artist and potter. She was a resident of Columbus, OH when I first had contact with her in the Seventies, but has lived for many years in New York state. Prince ran for TAFF in 1999. Her website is here. 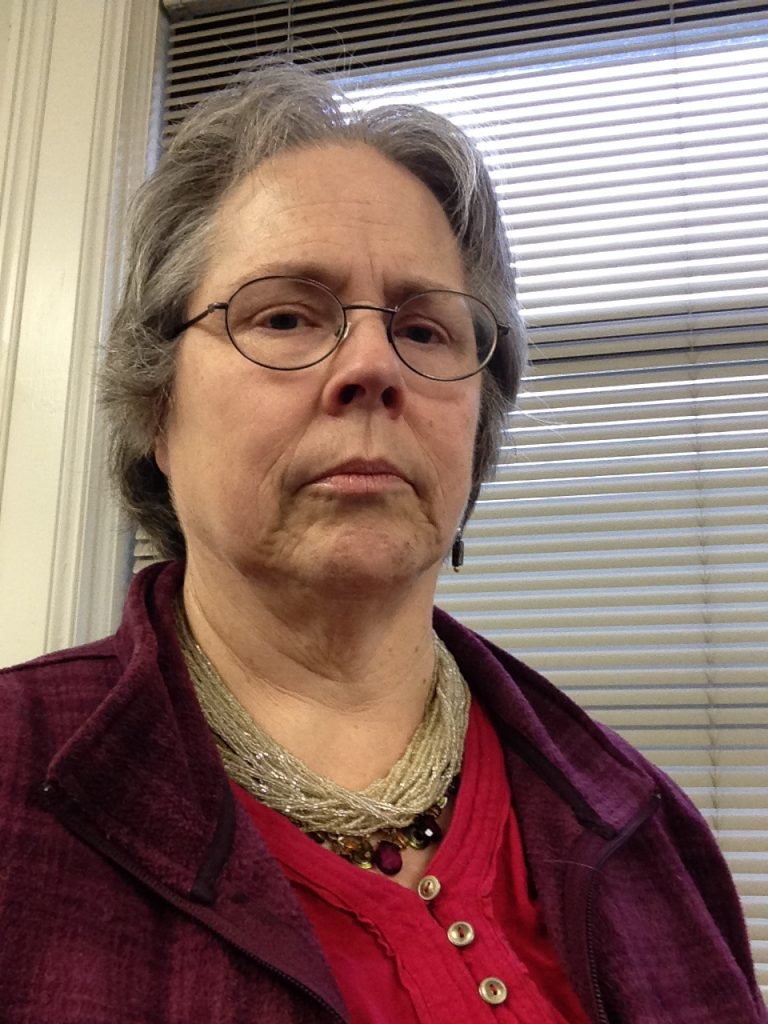 (7) CLOVEN COSPLAY. Nerd & Tie’s Trae Dorn gets to the bottom of a new round of complaints in “Angry Goat Productions’s Cosplay Unplugged Los Angeles Is Setting Off Red Flags For Sailor Moon Fans”.

We can confirm that the photos posted to the event’s page are stolen. The examples come from an event held in Japan last year, and that in itself is a pretty big red flag. Taking an image from someone else’s business and misrepresenting it as your own is a big no no pretty much everywhere, but it’s considered an especially egregious sin in the cosplay and convention world.

I know quite a few people who would boycott an event just for that.

The warning also links to a Who Scammed You? page, which claims that organizer Ray Jelley isn’t a real person. Now, I’ve had some experience dealing with people pretending to be other people online, and while Mr. Jelley does occasionally use an Errol Flynn photo on social media, I can honestly say that he appears to be a real human being.

A real human being with an interesting history….

(9) UNLISTED NUMBERS. ComicsBeat learned that graphic novels will no longer be part of the New York Times Bestseller list.

According to an email subscription version of February 5th’s NY Times Best Sellers List, “Beginning with the advance BSL edition that will be delivered today for February 5, 2017 there will be revisions to multiple categories in the publication. These changes will span weekly and monthly lists.” One of these changes appears to be the deletion of the hardcover graphic novels, softcover graphic novels, and manga Best Seller lists, as none of these sections are included in the document that we have reviewed.

ComicsBeat had further comment here and here, in which an unnamed spokesperson for the Times cites that “the discontinued lists did not reach or resonate with many readers.”

(10) MARCHING INTO PREHISTORY. If you’ve got six minutes, you can see how a vast number of dinosaur species compared in size to modern humans.

Assembly Bill 228 has been introduced by California State Assembly Members Gloria and Chiu. If passed, this bill will provide significant relief from the most troubling and onerous provisions of AB 1570, California’s new autograph law.

The full language of AB 228 is found HERE.

…The legislative process is long and complicated.  Bills pass through policy committees in each house of the legislature and the process takes many months.  What AB 228 needs to help ensure that it becomes law is your support.  Right now, the best help you can provide is to:

Write a letter of support for AB 228 addressed to the bill’s primary author:

Make sure you have added your name and comments to the change.org petition.

(12) DON’T DRINK AND CRUNCH. All that and a bag of chips – they may have too much sodium, but otherwise a bag of Tostitos keeps you out of trouble.

Frito-Lay unveiled “Party Safe” Tostitos bag for the Super Bowl that detects whether its holder has been drinking and can even order an Uber.

The limited-edition “Party Safe” Tostitos bag, designed by Goodby Silverstein & Partners, contains a sensor connected to a microcontroller that detects trace amounts of alcohol on a person’s breath, turning the front of the bag red and showing an image of a steering wheel and the message, “Don’t Drink and Drive.”

The bag also flashes an Uber code and contains technology that allows the holder to tap their phone against it to order an Uber for $10 off during and after the Super Bowl Feb. 5.

“We’re proud to introduce to the world the first bag of chips that gets you home safe,” Roger Baran, a Goodby Silverstein & Partners creative director, told Adweek

(13) ULTIMATE SACRIFICE. Observing the 50th anniversary of the Apollo pad fire on January 22, 1967: “The fire that may have saved the Apollo programme”.

Fifty years ago, a fire broke out during a test of the rocket that would take men to the Moon. Three astronauts died on the launch pad – but their deaths were not in vain.

As countdown resumed, the air in the capsule was replaced with pure oxygen. The oxygen was maintained at higher pressure inside the capsule than outside. This simulated the increased pressure of the spacecraft in orbit and allowed the astronauts to breathe comfortably.

Both the single-man Mercury and two-man Gemini capsules had followed the same procedure without incident. It was so routine that the safety manual for testing the spacecraft made no reference to the hazards of strapping a crew into an experimental space capsule in a pressurised oxygen environment.

There had been problems all day with communications between the ground and spacecraft, which was only a few hundred metres away from the control centre on the launch pad. As the countdown continued and more systems were switched across to Apollo 1, at times it was impossible to make out what the astronauts were saying. “I remember Gus Grissom got very exasperated,” recalls Griffin. “He was really mad.”

“Jesus Christ,” Grissom exclaimed. “How are we going to get to the Moon if we can’t talk between two or three buildings?”…

The museum says the Russian capsule is an important part of UK space history and hopes it will inspire the public.

The Soyuz TMA-19M has been refurbished, but is still slightly singed from re-entry into the Earth’s atmosphere.

Business Secretary Greg Clark has confirmed that Major Peake will make a second mission to the space station.

The timing will be decided by the European Space Agency (Esa).

“In life people are very busy doing lots of things,” he explains through a translator.

“The time you have to choose what media or entertainment you experience is dwindling.

“More and more people are looking at types of media that combine elements together.”

“If we just make a game people are less likely to choose that as something to do.

“They would rather engage in something that combines different forms of entertainment together.

“That’s where we need to focus our efforts, on this convergence.”

(16) BOOKS BEYOND NUMBER. Hampus Eckerman calls it, “The roots of Mount Tsundoku.” The Guardian calls it “Bibliomania: the strange history of compulsive book buying”.

In the 19th century, book collecting became common among gentlemen, mostly in Britain, and grew into an obsession that one of its participants called “bibliomania”. Thomas Frognall Dibdin, an English cleric and bibliographer, wrote Bibliomania, or Book Madness: A Bibliographical Romance, which was a gentle satire of those he saw as afflicted with this “neurosis”. Dibdin medicalised the condition, going so far as to provide a list of symptoms manifested in the particular types of books that they obsessively sought: “First editions, true editions, black letter-printed books, large paper copies; uncut books with edges that are not sheared by binder’s tools; illustrated copies; unique copies with morocco binding or silk lining; and copies printed on vellum.”

(17) NO ALIEN SEQUEL. Alien Theory analyzes the fate of the series – “Alien 5 Cancelled: Where Does This Leave the Series? And Ripley?”

[Thanks to John King Tarpinian, Chip Hitchcock, Hampus Eckerman, Martin Morse Wooster, and Jason for some of these stories. Title credit belongs to File 770 contributing editor of the day Jack Lint.]