(1) IT’S ALIVE! The Hollywood Reporter says “‘The Expanse’ Revived for Season 4 at Amazon”.

Amazon Studios is in talks to revive one of CEO Jeff Bezos’ favorite properties.

The retailer and streaming outlet is near a deal to revive space drama The Expanse for a fourth season just 10 days after Syfy canceled the series. Amazon Studios declined comment as sources note the deal is not closed.

Starring Steven Strait and based on James S.A. Comedy’s [sic] best-selling book series of the same name, Syfy had only first-run linear rights in the U.S. to The Expanse. Amazon Studios had streaming rights to the first three seasons of the show. Sources say Bezos is a big fan of the book and was livid that the TV series went to NBCUniversal-owned Syfy. The move is said to have ignited Bezos’ demand that Amazon Studios brass find the company’s version of Game of Thrones.

(2) FLYNN STROKE. Author Michael Flynn is hospitalized. His daughter made the announcement on Facebook:

Hi. This is Mike’s daughter. He will be absent from the internet for a few days, as he has had a pontine stroke and is in the hospital. After that, he’ll be going to rehab for a few days. He’s doing very well, all things considered. He’s eating a sandwich right now and has previously cracked some ill-advised “dad jokes” with the doctors and nurses.

(3) SUPPORT FOR ANTIHARASSMENT POLICIES. The Utah-based Rock Canyon Writers group of YA authors calls on writers to sign their “Conference Harassment Pledge”.

It has become increasingly clear that we must face the problems of sexual harassment and other kinds of harassment (racial, disability, sexual/gender identity, religion, nationalism, and more) that are happening within our own children’s literature community. We acknowledge that this is a systemic problem, and that systems of power are very difficult to change. They are also difficult
to see, but we must start to see the ways in which we are all implicated in looking away from uncomfortable talk about those we have once looked up to within the community. We cannot change this problem until we see it and face it
plainly. We must start thinking differently, intervening more quickly, believing victims more easily, and allowing excuses less readily. We cannot allow harassers to continue to act freely and without consequence, nor can we allow victims to be ignored, revictimized, or minimized. Nor can we continue a “whisper network” of knowledge that only helps those who are “in the know.”

… We plead with writers to cosign this document and to pledge NOT to attend conferences where there is no policy in place or where stated policies have not been followed through on.

(4) DOGWHISTLES FOR AI. “Alexa and Siri Can Hear This Hidden Command. You Can’t.” The New York Times has the story.

Many people have grown accustomed to talking to their smart devices, asking them to read a text, play a song or set an alarm. But someone else might be secretly talking to them, too.

Over the last two years, researchers in China and the United States have begun demonstrating that they can send hidden commands that are undetectable to the human ear to Apple’s Siri, Amazon’s Alexa and Google’s Assistant. Inside university labs, the researchers have been able to secretly activate the artificial intelligence systems on smartphones and smart speakers, making them dial phone numbers or open websites. In the wrong hands, the technology could be used to unlock doors, wire money or buy stuff online — simply with music playing over the radio.

A group of students from University of California, Berkeley, and Georgetown University showed in 2016 that they could hide commands in white noise played over loudspeakers and through YouTube videos to get smart devices to turn on airplane mode or open a website.

This month, some of those Berkeley researchers published a research paper that went further, saying they could embed commands directly into recordings of music or spoken text. So while a human listener hears someone talking or an orchestra playing, Amazon’s Echo speaker might hear an instruction to add something to your shopping list.

The way Walter Jon Williams puts it is:

Of course you knew that when you installed Alexa, Siri, or Google’s Assistant in your home, you were installing a spy.  You just trusted that Amazon, Apple, or Google would use your information for good, or at least would not actively harm you.

What you may not have known is that these assistants aren’t just spies, they’re potential enemy saboteurs.

(5) FOCUS ON THE DONUT NOT THE HOLE. Scott Edelman calls on everyone to “Relive Nebula Awards weekends past and present in the third lightning-round episode of Eating the Fantastic”. 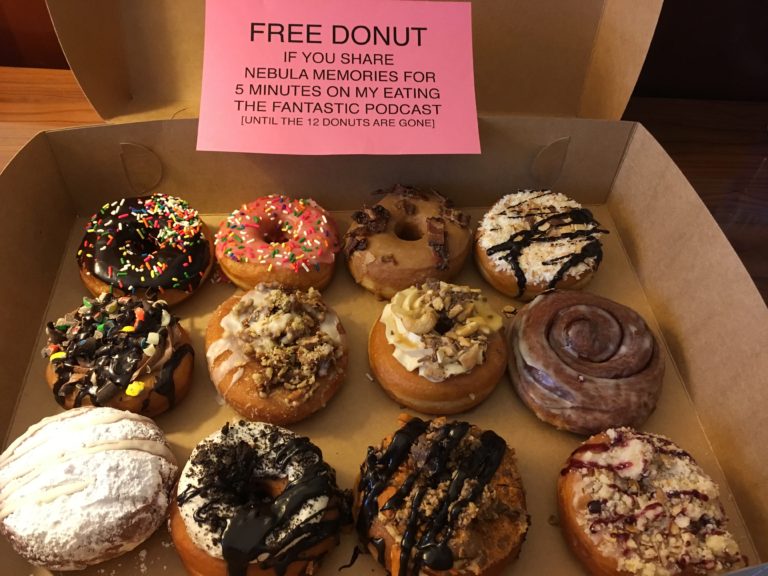 In 2016, Eating the Fantastic brought you the Readercon Donut Spectacular.

In 2017, you were invited to partake of the Balticon Donut Extravaganza.

That’s right—it’s time for another lightning-round episode of Eating the Fantastic as 15 guests devour a tasty dozen—this time from Pittsburgh’s Just Good Donuts— while recounting their favorite Nebula Awards memories.

During the Nebula Awards weekend which ended yesterday, I sat near registration with a dozen donuts and a sign offering a free one to any who’d come on the show to chat about their memories of this annual event, and waited to see what would happen.

Which is how I ended up listening as Michael Swanwick explained how his love of Isaac Asimov impelled him to walk out on guest speaker Newt Gingrich, David D. Levine remembered catching the penultimate Space Shuttle launch, Daryl Gregory recalled the compliment which caused him to get yelled at by Harlan Ellison, Barry Goldblatt revealed what cabdrivers do when they find out he’s an agent, Cat Rambo put in a pitch for SFFWA membership, Fran Wilde confessed a moment of squee which was also a moment of ooops, Steven H. Silver shared how he caused Anne McCaffrey to receive a Pern threadfall, Annalee Flower Horne told of the time John Hodgman stood up for her onstage during the awards banquet, and much, much more!

If the San Diego Comic Convention vs Salt Lake Comic Con jury trial was the Empire Strikes Back, this marks Act I of Return of the Jedi. Dan Farr Productions has filed a motion for a new trial, which will likely lead to our appeal with the U.S. Court Of Appeals, Ninth Circuit.

(8) HITTING THE BRICKS. Newsweek has pictures: “Lego Superheroes: Batman, Superman and Other DC Comics Characters Made of Over Two Million Bricks”. 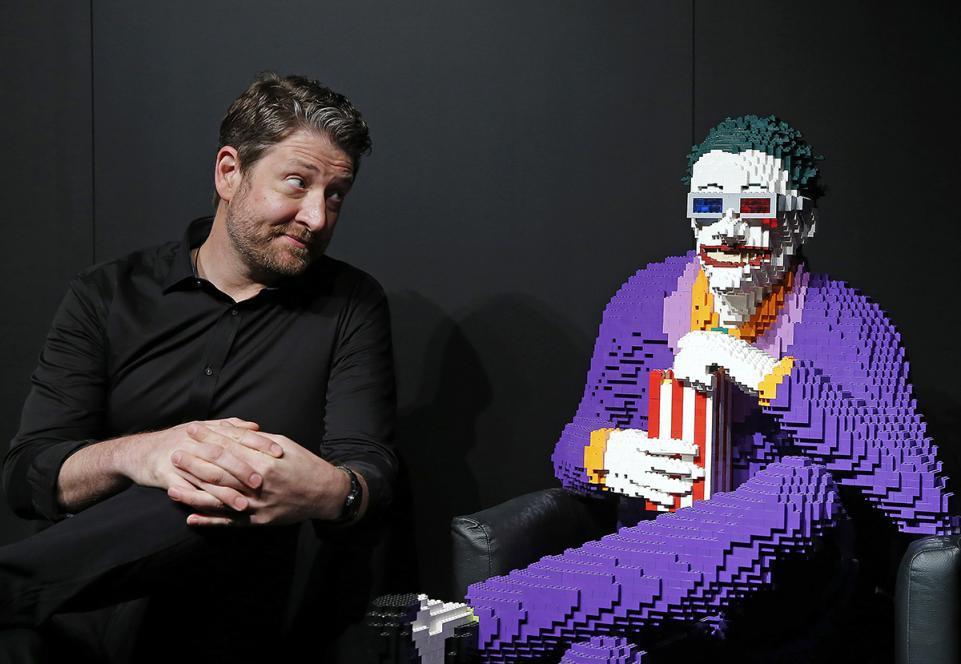 American artist Nathan Sawaya’s captivates crowds around the world with his life-size sculptures of DC Comics’ most famous characters, building them with Lego bricks. His latest exhibition features over 100 sculptures, with some taking as long as two or three weeks to make. Besides patience, they require a lot of Lego. His recreation of the Batmobile is 18 feet long and uses around half a million bricks.

Sawaya was originally working as a corporate lawyer when he decided to turn to Lego as his creative outlet. “Some people go to the gym or go running at the end of the day; for me, I needed to create something,” he explained in a recent interview. Now he owns an art studio in Los Angeles housing over 7 million bricks.

(9) CAN YOU DIG IT? James Davis Nicoll is out to save the world: “Tugging on Superman’s Cape: Simple Suggestions for Avoiding World-Destroying Disaster. Or Not.”

There are, I think, a few basic safety rules which, if consistently ignored, will almost always provide would-be adventurers with sufficient diversion to create an exciting plot.

Rule number one: do not engage in archaeology. Do not fund archaeology. Above all, do not free that which has been carefully entombed. In most SF and fantasy settings, there were good reasons for entombment…and they still hold.

Indiana Jones did not manage to keep the Nazis from grabbing the Ark of the Covenant. No, the Ark protected itself. As you can see…

(10) THE THRILLING POO OF YESTERYEAR. NPR has the story: “DNA Analysis Of Ancient Excrement Reveals The Diets Of Centuries Past”.

When it comes to the nitty, gritty details, life in antiquity was pretty stinky – in a literal sense. Without high food and personal hygienic standards, most people probably contracted an intestinal worm at some point or another, says veterinary scientist Martin Søe. “I think it’s fair to say it was very, very common. In places with low hygienic standards, you still have a lot of whipworm and round worm.”

That also means lots of parasitic eggs dumped into latrines through the years. In a scientist like Søe’s eyes, that’s a historical record of what people ate and what ailed their guts. So he and his colleagues at the University of Copenhagen and Aarhus University began exhuming ancient excrement from toilets of yore to reconstruct snapshots of food and health in bygone centuries.

(11) CROWDED NEIGHBORHOOD. At the time E.E. Smith wrote the Lensman series, the odds against this were supposed to be, ah, astronomical: “‘Ground-breaking’ galaxy collision detected”.

Known as starburst galaxies, the objects are extremely bright as they are forming stars at a high rate – up to 1,000 times as fast as the Milky Way.

Professor Caitlin Casey, who was not involved in the study, described the findings as “extremely unusual.”

“We often get excited when we find just two galaxies like this grouped together, because each one is already quite unusual and rare compared to ‘normal galaxies’, forming stars several hundreds or thousands of times faster than the Milky Way. To find fourteen such starbursts all grouped together is unheard of,” the University of Texas at Austin researcher commented. 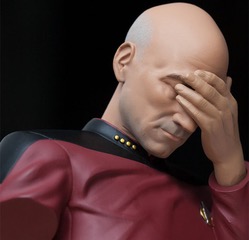 ThinkGeek has the perfect salve for every Trekkies effort to resist the workplace grind. An official 6-inch bust of Jean-Luc Picard in his notorious, glorious facepalm pose.

There are so many moments in life where a glance toward Picard would be just what you need to take the edge off life’s less than stellar moments.

But, here’s the bad news. It’s a limited edition. Only 1602 people will be able to get their hands on this official merchandise.

…At US$64.99 it’s a little more than joke gift territory, but ThinkGeek has limited the bust to two per customer, so they know this thing will sell out fast.

Make it so. Before it’s too late.

(13) SING ME A SONG. Rev. Bob broke out a filk to wide applause in today’s comments:

It’s file o’clock on a Caturday
My mailbox just sounded a chime
Mike’s news for fans is awaiting me
Today’s Pixel Scroll’s here right on time!

There’s a dozen or two short news items there
Plus a couple of odd videos
A comic or two and a birthday or three
And maybe some blog links – who knows?

Pixels keep scrollin’ on
And comments keep rollin’ along…

I see movement – there, in a dark corner
They’re probably the shy lurker type
Far away, I may hear puppies baying now
But I’m not buying into their hype.

Well, Kendall scored fifth ‘fore I hit the end
With Hampus in second-fifth place
Sometime Soon Lee will appear
Followed by Paul Weimer
As Stoic and Chip up the pace.

Damn, I can’t read this verse for the life o’ me
But not ’cause I’m blind, drunk or mean
No, JJ said it was too spoilery
And encoded it in ROT13.

And the book recs, they grow just like lava flows
As Mt. Tsundoku’s slopes reach the skies
And my bank account weeps as my rent money creeps
Into publishers’ pockets – b’bye!