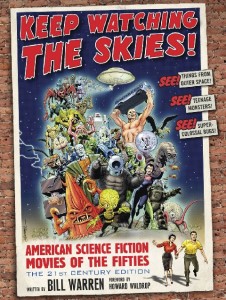 Bill Warren’s Keep Watching The Skies: The 21st Century Edition, a detailed study of hundreds of science fiction movies released from 1950 through 1962, will ship from McFarland immediately — so order now.

Bill devoted five years to this update (Keep Watching the Skies first appeared in two volumes about 20 years ago), drawing on remarks by the filmmakers that have emerged in the quarter century since the original edition. He gives a detailed plot synopsis of each film, lists cast and credits, and summarizes  its critical reception. The best part is his discussion of the movies, studded with anecdotes about the people who made them.  Now it’s in one volume that Bill says seems “as thick as a Manhattan phone book.”

Another attraction is a foreword by Howard Waldrop.

And Kerry Gammill has done a beautiful cover – exactly what Bill was looking for, only better.  Bill says:

Isn’t it great?  Kerry Gammill is a comic book artist, living in Texas.  He lived out here for a while when he worked for a makeup effects company, and we often had lunch.  Originally, McFarland was going to use, yet again, a shot from The Day the Earth Stood Still for the cover (Klaatu and the robot on the front porch of the flying saucer–which was already the cover for the paperback of the original KWTS).  I told Kerry I wanted the cover to resemble a poster from those movies–most of which were done by one guy, Reynold Brown–but he demurred at first, saying that he didn’t do oil paintings like Brown did.  I said that I wanted a comic book look because comic books also underwent a big change in the 1950s (and were very important to me).  I said maybe show the Robot Monster (the gorilla in a diving helmet) wrestling with the Man from Planet X, giant sized, people fleeing in the foreground.  Maybe add some other icons of the 50s in that kind of cornucopia effect that Jack Davis and Frazetta sometimes used in their movie poster work.

I was gob-smacked by what Kerry turned in. Talk about taking a flimsy idea and running with it — he galloped off for a full touchdown. I’ve had posters made from the art, which I hope to hand out as door prizes for some panel I’m on this weekend at Loscon.

Update 11/24/2009: Bill Warren confirmed with McFarland that orders will be immediately fulfilled, even though the website lists March 2010 as the “official release.” So I have made the necessary changes to this post.