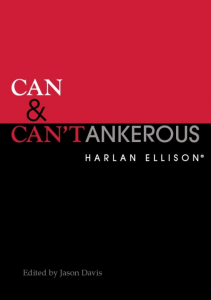 Later this year Subterranean Press will issue Harlan Ellison’s collection Can & Can’tankerous, ten previously uncollected tales from the fifth and sixth decades of Ellison’s career. The volume is available now for preorder.

Can you match the titles with the publisher’s descriptions?

I knew you could.

10 thoughts on “Preorder Ellison’s Can & Can’tankerous”