Alasdair Stuart of the Pseudopod podcast by Escape Artists has launched a Kickstarter fundraising appeal as part of the podcast’s 10th Anniversary celebration.

Here’s the plan: we already pay pro rates for stories. We pay our editorial, production and administrative staff – a unique position in the industry. Now, it’s time to add our narrators to that list. For that, we need extra capital.

A host of incentives are being offered to donors. Here are three examples.

The mug has been designed especially for us by Jonathan M. Chaffin, whose Horror in Clay company has run five successful crowdfunding campaigns for horror-themed mugs. Jonathan does amazing work; I own a couple of the mugs myself and we’re really excited to see this one become a reality. Particularly since the design is Pseudopod Tower constructed with nods to famous horror movies, a mysterious hooded ‘Slush wrangler’ and the show’s catchphrase ‘We have a story for you and we promise you it’s true’ in Enochian. Enochian! 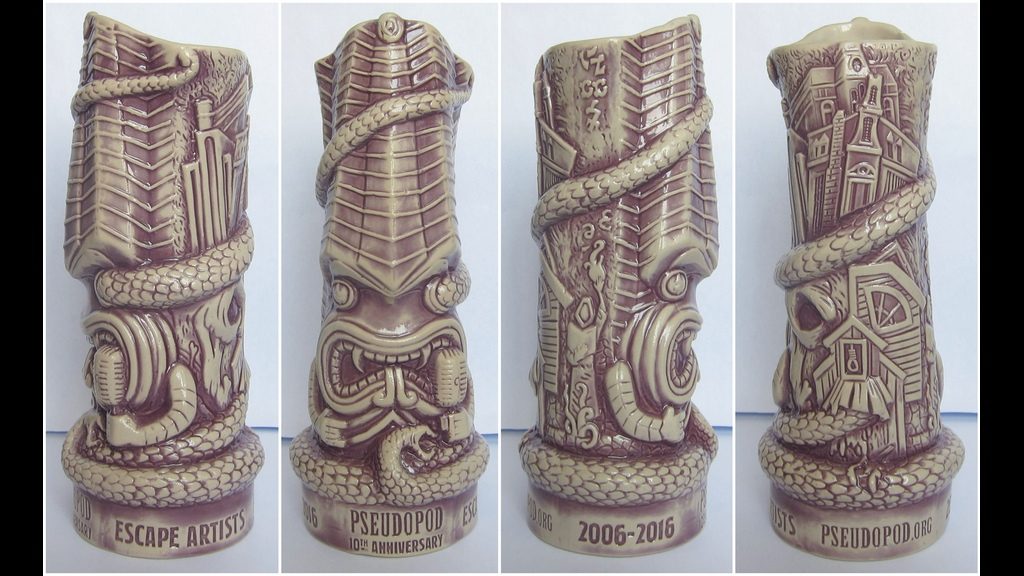 The Anthology: For Mortal Things Unsung

We’re going all out too, launching our first ever anthology. For Mortal Things Unsung features specially commissioned stories from some of our best authors as well as reprints of all-time favourites.

We have added a few reward levels for those of you who would like to enhance your patronage.

Want to be specifically thanked in an episode endcap? Or you want someone else to be thanked in your place? We can do that, and we’re ready to thank one person every week for a year.

Want to include a special message before or after an episode? Birthday or anniversary wish to that special horror fan in your life? Pick the closing quote? Want to get Alasdair to recite horror limericks in his Manx accent? We can do that, too, and we’re ready to have one of each every month for a year. The Greater Sponsor can place the message before the story and the regular can place it after.