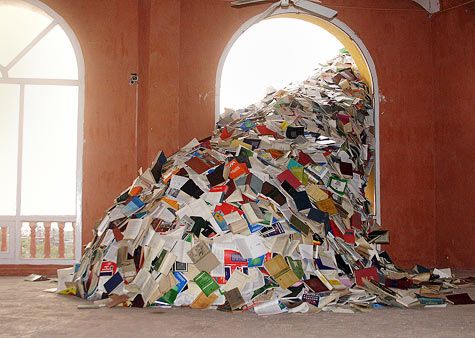 By Daniel Dern: It seems a shame to have the topic of “what’re we reading, what do we recommend” as a late-comer thread (some starting some 400 comments in, give or take) to an existing page (# 39769), which is mostly about con stuff, I suggest we dive into the topic in its own scroll, sic:

Allow me to kick this recommendapalooza-fest with a few that I’ve read (and enjoyed) over the past several months. Note, some aren’t sf or f, some aren’t even fiction — but IMHO they’re the kind of books that Filers and other sf/f fans might (also) enjoy:

PERSEPOLIS RISING, James A. Corey. The seventh novel in THE EXPANSE series. This one starts about three decades after the previous book — soon enough that the protagonists we’ve come to love (James F***ing Holden, Bobbi Draper, Amos, etc.) are still alive and trying to solve problems… but long enough that they’re not spring or even summer chickens. I enjoyed this one; as Nero Wolfe says (sparingly), “Satisfactory.”

CODE NAME VERITY. I saw something about this in one of my magazines, which led me to getting it from the library. The prose is incredible compelling, particularly the descriptions of airplane maintenance, aerial views of terrain… and, well, everything else.

Code Name Verity is a young adult historical novel by Elizabeth Wein that was published in 2012.[1] It focuses on the friendship between two young British women, one English and one Scottish, in World War II – a spy captured by the Nazis in German-occupied France and the pilot who brought her there. It was named a Michael L. Printz Honor Book in 2013, and shortlisted for the Carnegie Medal.

A loose sequel, Rose Under Fire, was published in 2013. A prequel novel, The Pearl Thief, was published in May 2017; it is a mystery involving Code Name Verity’s protagonist Julie one year before the war starts.

THE EMERALD CIRCUS, Jane Yolen. A collection of stories. I’m about halfway through, it feels wrong to read these hastily.

Steven Brust’s VLAD TALTOS series. Somehow I never tried these before. I picked one up at our town recycling’s take some/leave some book cabin — always great to find an author new to me with 10 or more books I haven’t read yet.

I started enjoying it enough that I set it aside, so I could read them in order. (Brust says that it doesn’t matter what order you read them in, and, five in, I can see that; that said, one method is “order written in” (which I’m doing), or “chrono order”). Medium-rigorous fantasy with interesting politics. Clearly owes a lot to Zelazny’s Amber and other works for attitude, narrative tone also reminds me of Rex Stout’s Nero Wolfe in spots.

THE RIVER OF CONSCIOUSNESS, Oliver Sacks. Essays, by the neurologist who brought us “The Man Who Mistook His Wife for a Hat” and other fascinating stuff. The first essay alone, on Darwin’s writings about plants and evolution, could fuel a bookshelf of sf and f stories.

OK, fellow Filers, the bouncing ball is in your court!

47 thoughts on “Read Every Mountain: Books For Your Mount To-Be-Read”