Truman Capote was a copyboy (along with Harper Lee who was also known for a book or two and a neighbor in New Orleans of Truman’s) at Mademoiselle magazine in 1946. His job was to take rejected story submissions and return them with the rejection letter. One batch included The Homecoming which Ray Bradbury had submitted for the October 1946 Halloween issue. Truman read the story and loved it so much he took it back to the editor and insisted it be used, which it was. This was the first story of Ray’s in a mainstream publication. Truman and Ray are now resting at the same cemetery. 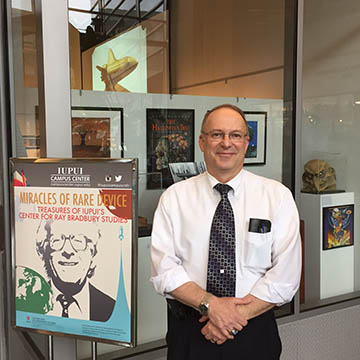 “Miracles of Rare Device: Treasure of the Center for Ray Bradbury Studies” reports on the exhibit of art and artifacts from IUPUI’s Bradbury Memorial Archive that ran from August 3 to August 28. Nearly one thousand people visited the exhibit in the university’s Campus Center Cultural Arts Gallery.

Bradbury’s desk, books, magazines, posters and photographs were displayed in the gallery, along with other mementoes the author collected during his lifetime.

1 thought on “Reasons to Remember Bradbury”