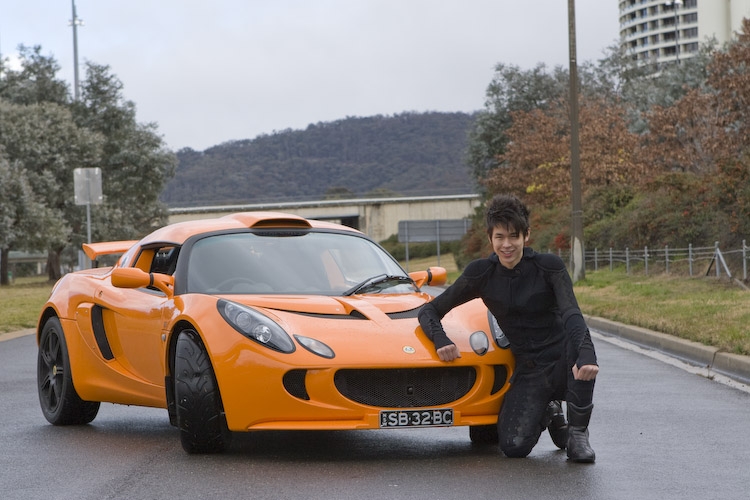 Akio Shibano, one of the alien-fighting teens (played by Adrian Lee) with the Lotus he drives in Resistance.

Lotus has won 79 Grand Prix races, which should make it fast enough to keep the heroes of Resistance out of the clutches of invading aliens.

The Resistance Will Drive A Lotus
Lotus to Provide Hero Vehicles

It was announced today by Andrew Dillon, executive producer of That’s-A-Wrap Productions, that the company has signed a deal with Group Lotus, manufacturers of the Lotus Elise and Lotus Exige sportscars, for its upcoming science fiction action-adventure film and television project, Resistance.

Resistance is the story of a covert attempt by aliens from outer space to take over the Earth and a guerilla-style battle to stop them when most of the world won’t believe the threat exists. What makes the story even more interesting is its focus on a band of super-smart teenagers at the center of this conflict: not only do they have to save the world but they have to deal with school, hormones and dating.

In addition to developing and manufacturing sportscars for private use, Lotus has a long history of creating race cars, including seven Formula One World Championships. Lotus won a total of 79 Grand Prix races and beat Ferrari as the first team to achieve 50 Grand Prix victories, despite Ferrari having won their first nine years sooner. Lotus’s consumer vehicles are considered some of the finest, fastest, and best looking cars on the road.

The heroes of Resistance will have several air and land vehicles at their disposal, now including a Lotus Exige S. Along with the Exige’s natural sexy, streamlined look and incredible speed and handling, additional special abilities provided by Resistance‘s special effects providers, Atmosphere Visual Effects, will make it the most amazing car on the road.

Publicity and promotional events involving the Resistance cast and Lotus are still being planned at this time.

Production on the Resistance feature is expected to start later this year.