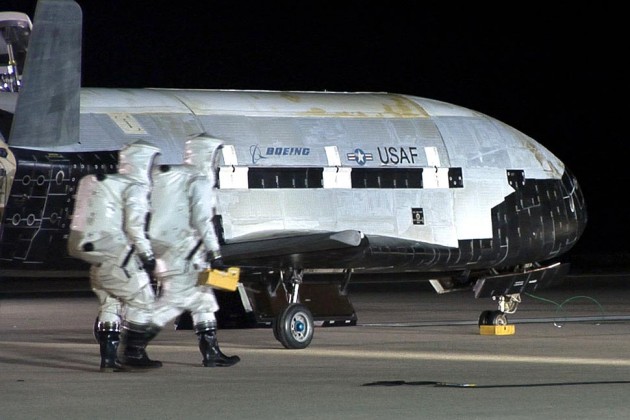 The X-37B is back. Photograph by Michael Stonecypher/U.S. Air Force.

By James H. Burns: Many years ago, I can remember the idea being floated that there was a secret manned space program…

And, at first, as a kid, while I relived my anger over the Apollo program — and most of its subsequent progressions — being cancelled: I was hopeful! Better a secret manned space program, I believe I felt, than the near-total abandonment of what should have been our 1970s and ’80s and beyond destiny in space.

…All of which I’ve been reminded of, by this week’s return from space of our clandestine cavalier, our military shuttle….

A top secret US robot space plane landed back on Earth on Friday after a 22-month orbit, officials said, although the craft’s mission remains shrouded in mystery.

The unmanned X-37B, which looks like a miniature space shuttle, glided into the Vandenberg Air Force Base in California after having launched on December 11, 2012, on a mission that military officers say is still strictly secret.

5 thoughts on “Return of the Space Shh!uttle”