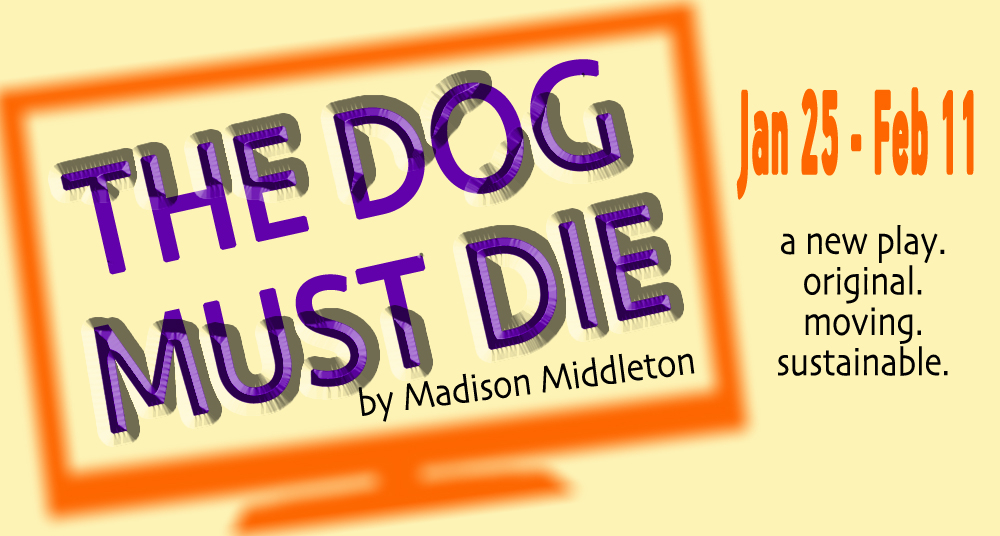 By Martin Morse Wooster: How do you judge an sf play by an 18-year-old?

That’s the problem I had when I saw The Dog Must Die, a play by Madison Middleton, a high school senior from Washington, DC.  Her play was produced by The Highwood Theatre, a semi-professional troupe.  The theatre is located in a nondescript office building in Silver Spring, Maryland with sf roots; one floor below, the office directory told me, was the Planet of Accounting.

When I was in high school Scott Edelstein (not Scott Edelman, but someone else) was famous for, at age 16, selling a short story to Swank, a magazine he could not legally buy.  The equivalent transgression today is that in Middleton’s play, there are many adult beverages being consumed.

The Dog Must Die is set in 2033.  The planet is ravaged by ecological disaster.  Savage fires and floods have pulverized the earth, and the government has selected a few people to live in a bunker for a year to survive the environmental apocalypse. Produce has largely vanished, and Thanksgiving turkeys have been replaced by mystery meat.

The five people all have different skills.  We meet a doctor, an architect, a high school philosophy teacher, an agricultural specialist, and a guy who spends most of his time on a couch moaning for reasons that are not quite clear.  Backstory scenes show the philosophy teacher in a park playing chess and (less convincingly) the doctor stressed after a patient dies in her office.

But the agricultural specialist has a dog, who has muck on her feet.  She explains that the government has given her protective gear and a dog, so she can plant seeds and the dog can smell where the best soil might be located.  But why does she get to go out when everyone else has to stay in the bunker?  With all the cast members racked with cabin fever, anything could happen….

The problem with The Dog Must Die is one of world building.  We know that enough of the world’s infrastructure has survived that the head of “the International Union of World Governments” can broadcast globally.  Why can’t the characters access the Internet?  Why can’t they spend their days watching Khan Academy videos or binging on TV? Why don’t they have any books?

Moreover, what I saw in the play didn’t convince me that people had to stay in the bunker for all that time.  Middleton told me after the show that the world she created had been nuked, but that information came from the scene where the global leader broadcast, and I could hear very little of the speech, even from the front row.  I told her she should study John Brunner’s The Sheep Look Up, that magnificently gloomy novel of ecological disaster, and study how he shows how his world is collapsing.

I can’t judge The Dog Must Die the way I would analyze a play by a professional.  But if I were a college admissions counselor at a highly competitive school, I would be very impressed by Middleton’s talent.  I hope she ends up at a school with an excellent drama department that has professors that make her write a lot.  If that happens, she could be someone that, in 2030, is recognized as a rising talent in the theatre.