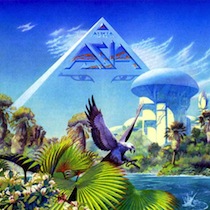 Artist Roger Dean has filed a $50 million lawsuit against Avatar’s James Cameron for copyright infringement and unjust enrichment. And Harlan Ellison says he would love to testify in Dean’s behalf.

Dean’s work has been used on top-selling record albums by many bands, among them Yes and Asia, been displayed in museums and published in books. Filed on June 27, the federal suit contends:

The similarities of each such work are substantial, continuing, and direct so as to rule out any accidental copying or similarity in scenes common to the genre. The infringing portions of Avatar are so similar to Plaintiffs Works that Defendants and others employed in the preparation of the film must have had access to the Plaintiffs Works.

The two key tree forms in the Na’vi homeland, the ‘Hometree’ and the ‘Tree of Life’ and other features of the Pandora landscape, are copies from Plaintiff’s [Dean’s] body of work, in particular the paintings ‘Pathways’ and ‘Floating Jungle’.… These are iconic themes revisited in 10 major paintings over 45 years with a large number of sketches and watercolors going back to initial work in the mid 60’s.

The Defendants’ ‘Signature Landforms’ are accordingly copied from Plaintiff’s works along with textures, patterns and many other distinctive elements and features of Plaintiff’s works. As a result the overall look and feel of the planet Pandora substantially resembles a Roger Dean world in that Pandora’s most striking and memorable features are those created by Plaintff.

Beyond $50 million in damages, Roger Dean wants an injunction, a full accounting and a court order posted online stating the defendants violated his copyright. He wants his rights enforced for future Avatar projects, too:

Further, upon information and belief, Defendants intend to film two (2) sequels and possibly a ‘prequel’ to Avatar, and a Walt Disney World Avatar-themed attraction, which sequels, prequel and attraction are very likely to utilize many of the original images of Plaintiff which would further continue Defendants breach of contractual obligations owed to Plaintiff.

If Roger Dean needs any help, Harlan Ellison is eager to testify about his own experience with James Cameron. Ellison asked readers of his forum to spread the word:

Please make it go viral, if you can, that HARLAN ELLISON IS READY TO TESTIFY FOR ROGER DEAN in his plagiarism lawsuit against James Cameron. Please refresh Roger’s memory that I have been in his place, same guy, same allegation, and that I won…with smoking gun in Mr. Cameron’s mouth, along with his foot. I have no animus toward Cameron, but he really must stop stealing from his betters.

Please, anyone, get to Roger or his legal staff, and at least have them become aware of this vital litigious history!

I have great fondness for Roger Dean and the immaculate originality of his work. The moment I saw AVATAR I recognized the breaking&entering of the Dean Sacrament.

Any help will be appreciated. This suit has been long in the coming.

Update 07/02/2013: This afternoon Harlan posted, “Just got a call from the amazing, famous Roger Dean, from the UK. Thank you all for getting my shout-out to him. Godspeed, Roger, as you try, as I once did, to teach James Cameron that NO ONE can puff oneself up blowhard enough to escape one’s own thieving ways. Or, as Michelangelo put it, ‘Where I steal an idea…I leave my knife.'”