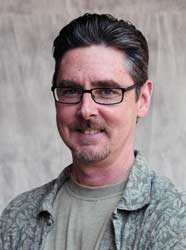 Rob Latham, a tenured professor of English at University of California, Riverside and a member of its science fiction research cluster who evangelized the Eaton Collection throughout fandom, has been fired by the UC Board of Regents. Charges of sexual harassment and substance abuse are addressed in Latham’s 3,900-word statement, first presented to the Regents and now published by the Academe Blog, however, the exact charges are not quoted.

He denied the complaint of sexual harassment:

….I can’t believe that this case, which began with false charges of sexual harassment brought by a disgruntled graduate student and his girlfriend, has been allowed to reach the Board of Regents. It should have been settled through informal mediation long ago.

However, not only was no such good faith effort ever attempted by the UCR administration, but I was never even invited to respond to the charges or to submit exculpatory evidence. Instead, the administration adopted an adversarial posture from the outset, as if the original allegations—the vast majority of which we now know to be untrue—had already been proven. As Vice Provost Daniel Ozer testified at the disciplinary hearing, the administration never sought to change course even when it became clear that the two complainants had submitted doctored evidence and leveled charges that were proven false by a police investigation.

He argued the issue of substance abuse was being manipulated to support a disproportionate disciplinary action:

I made a serious error of judgment in relation to substance abuse, for which I sought treatment one full year before any charges were filed against me. The Senate, for whatever reason, gave me no credit for that effort at self-correction, and now Chancellor Wilcox is asking you to dismiss me for the recurrence of a psychological illness, rather than for the original charges of flagrant, serial sexual harassment—charges that were considered and dismissed by the Hearing Committee, whose findings the Chancellor has accepted in their entirety.

He levied many criticisms against the hearing process in his address to the Regents, including —

I have outlined, in my ten-page written statement, the political pressures and rank homophobia that deformed the disciplinary process, including acts of official misconduct that are currently being investigated by the Faculty Senate. All I will repeat here is that the intervention of the graduate student union, at an early juncture of this case, and their threats to “go public” if the administration did not acquiesce to their demand for my “removal as Professor of English,” was crucial in setting the administration on the course they pursued. This course included manipulating and corrupting an ostensibly fair and impartial Title IX investigation, coaching student witnesses supportive of their case while attempting to intimidate those supportive of me, and suppressing evidence crucial to my defense before the Faculty Senate.

Latham spent the first 13 years of his teaching career at the University of Iowa as a Professor of English and American Studies, where he ran a Program in Sexuality Studies.

He was hired by UC Riverside in 2008 to join the English Department faculty, with responsibilities that included serving as an informal liaison to the J. Lloyd Eaton Collection of Science Fiction, Fantasy, Horror, and Utopian Literature. He received the Clareson Award for Distinguished Service from the SF Research Association in 2012, the field’s premier award.

Latham has made many connections with fanzine fans. He contributed a perceptive and well-received article to Earl Kemp’s eI #37 about using fanzines for academic research. Mike Horvat’s vast fanzine collection landed at the University of Iowa because a former student of Latham’s, Greg Beatty, a UI graduate spotted the listing online, and immediately emailed Latham.

Despite the growing prestige of UCR’s science fiction collection and research, there have been signs of conflict between the administration and faculty members in UCR’s science fiction research cluster. Both Latham and Nalo Hopkinson, a well-known sf writer and another member of that research cluster, publically expressed concern in summer 2014 about the way the Eaton Collection was being administered (see “How Healthy Is The Eaton Collection?”.)

Nothing that was aired in 2014 seems directly related to the issues in Latham’s hearing, other than the foreshadowing of the toxic professional relationships explicitly described in Latham’s statement to the Regents:

My hiring was the result of an international search for a senior scholar, mounted by former Dean Steve Cullenberg and former Chancellor Tim White, two very good men and superb administrators with whom I had an excellent working relationship. However, following the hire of Chancellor Wilcox in 2013—and especially of Provost D’Anieri in 2014—the atmosphere at UCR changed from one of cooperation and consultation with faculty to one of confrontation and hostility. I say this merely to indicate that I gave seven years of exemplary service to the campus but, following the lodging of false charges by a student with a grudge, have been hounded by a vengeful administration intent on railroading me out of my job.

Readers do not have full information to evaluate the case, nor is that likely to become public unless Latham follows up with a lawsuit and the suit goes to trial. However, news of Latham’s firing is all the more surprising for coming at the same time his standing as a scholar has been affirmed by an announcement that the MLA 2017 session “Dangerous Visions: Science Fiction’s Countercultures” will base its call for papers on responses to Latham’s “Countercultures” chapter in his edited volume The Oxford Handbook of Science Fiction (2014).

[Thanks to Andrew Porter and Nick Mamatas for the story.]