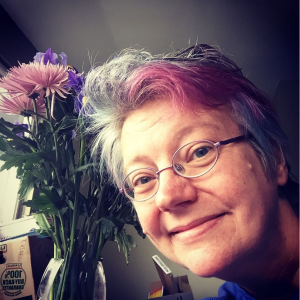 Cat Rambo officially announced today that she’s running for another term as President of Science Fiction and Fantasy Writers of America. The full statement is at her blog: “Let the Wild Rumpus Continue: Running for SFWA President Again”

I realized during the past year that I know more about what SFWA is accomplishing today that I have at any time since Jerry Pournelle was President back in the early Seventies. And I don’t mean he talked out of school, just that we were at LASFS meetings every week, so whenever SFWA solved a problem I’d hear about it.

In between, with exceptions for things like publicizing Bud Webster’s work with author estates, the organization has projected a strong sense that its business is something members discussed in-house. Even presidents who are savvy masters of social media when it comes to their own work have largely confined themselves to promoting SFWA’s public events, and fronting announcements of new qualifying markets and warnings about publisher scams. I didn’t consider it wrong for SFWA to play its cards close to the vest. However, that meant the organization didn’t build a level of goodwill in the sf community at large that it could draw on when new writers expressed skepticism about why they should join, and get a more patient hearing when critics started a kerfuffle.

Cat Rambo has become a SFWA President for all of the people by steering directly into the winds of social media, doing all kinds of outreach. She also liberally shares credit with all the other SFWA volunteers, introducing us to SFWA’s energetic creators and problem-solvers and giving faces to that team.

Rambo’s re-election platform begins with the highlights of her past two-and-a-half years.

If the members hold her over, here’s what she wants to accomplish in her next term.

And here’s an excerpt from her statement of qualifications:

I’ve got decent people skills and a solid work ethic. When it comes to the various factions that clash occasionally, I’ve got friends on most sides and pride myself on trying to listen and understand where people are coming from. I try to unite rather than divide, and to lead by example. I frequently touch base with other members of the SFWA team and work well with them, including weekly Google Hangout sessions, texts, and phone calls. I don’t take myself particularly seriously (most of the time), have no problem admitting when I’m wrong, and try to learn from both my mistakes and what other people pass along.

She makes joining SFWA a more attractive option than ever. You’ll find more reasons spelled out in Henry Lien’s SFWA anthem — introduced on Rambo’s watch. (I’m one voter who’s putting it on his Hugo nominating ballot.)