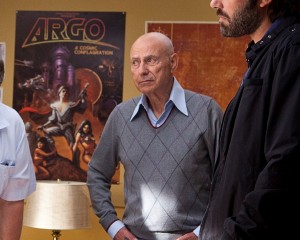 The Oscar nominees were announced by the Academy of Motion Picture Arts and Sciences today, January 10. An sf/fandom news blog doesn’t really need any special justification to report a pop culture headline story of that type. Still, I do like to take up the challenge of tailoring the story to fit within the artificial boundaries of the field just the same.

So looking over the list of nominees I ask myself: How many of these pictures would fans feel are eligible for a Best Dramatic Presentation Hugo (long or short)?

Having read James Bacon’s review of the graphic adaptation of Tarantino’s script, it probably shouldn’t come as a surprise if fans decided the movie Django Unchained belongs on the ballot, although I haven’t seen anyone recommend that just yet.

Argo, despite being more closely “based on a true story” than most Hollywood films ever get, takes its title from a fake movie production that’s central to the plot – ultimately derived from the individual efforts of Roger Zelazny and Jack Kirby – and brought to life onscreen in costume, dialog and art. Hugo voters have a long track record of nominating whatever they identify with and approve.

But somewhat paradoxically, I doubt that The Master’s connection with L. Ron Hubbard, whose life is believed to have informed the story, will be a sufficiently powerful recommendation for many Hugo voters to write it on their ballots. I haven’t seen it, but knowing now that it boasts three Oscar-nominated performances — Joaquin Phoenix (Best Actor), Philip Seymour Hoffman (Best Supporting Actor), Amy Adams (Best Supporting Actress) – the movie obviously has its fans.

Here’s what I came up with as Your SF/Fantasy Oscar Nominees:

I’ve only begged off analyzing the Short Film (Animated) category nominees — “Adam and Dog” Minkyu Lee; “Fresh Guacamole” PES; “Head over Heels” Timothy Reckart and Fodhla Cronin O’Reilly; “Maggie Simpson in “The Longest Daycare”” David Silverman; and “Paperman” John Kahrs – because I have seen most of them and they’re all some kind of fantasy, and it sounds silly to argue that something isn’t quite the right flavor of fantasy for the Hugo ballot. That decision is best left to the wisdom of crowds.