(1) The advocates for Baltimore’s Poe House did not waste the opportunity presented by the local team’s presence in the Super Bowl to blame the Ravens football franchise for not picking up part of the tab to preserve the famed writer’s house. Y’know, just like the Chicago Bears subsidize the architectural masterworks of Frank Lloyd Wright, the San Francisco 49ers pay for painting the Golden Gate bridge, and the New York Giants played host to Jimmy Hoffa’s gravesite under the old Meadowlands stadium. (Well, they may have actually done that last one, just nobody’s certain.)

(2) I first encountered the idea of solar sails in the story “Sunjammer” by Arthur C. Clarke in a 1963 issue of Boys Life. Almost at the same slow rate of acceleration provided by the sails themselves, this technological idea is gaining acceptance. NASA reports there will soon be an outer space demonstration:

The concept of a huge, ultra-thin sail unfurling in space, using the pressure of sunlight to provide propellant-free transport, hovering and exploration capabilities, may seem like the stuff of science fiction, but a NASA research team developing the Technology Demonstration Mission known as “In-Space Demonstration of a Mission-Capable Solar Sail” intend to prove the viability and value of the technology just a few short years from now.

The project is called Sunjammer in honor of the story. Or perhaps that should be stories, plural, for a few months after Clarke’s tale appeared, Poul Anderson’s unrelated adventure about the same technology, likewise titled “Sunjammer,” ran as an Analog cover story (under his pseudonym, Winston P. Sanders).

(4) The word on the street is – don’t quit your day job even if you do sell your first genre novel. Galley Cat has the disillusioning figures —

The average advance these days, for a genre fiction novel, ranges between $2,500 and $10,000. That’s right. The novel you spent a year working on only earns you between $2,500 to $10,000 at first. When the book is published a year later, that advance will have long been spent. And you probably won’t see a royalty check until another year AFTER your book has been published (provided enough copies have sold to earn out your advance). So it will actually be two years from that advance check before you get paid again.

What’s really pathetic is that these numbers don’t seem to be any different than I heard writers throwing around 25 years ago. The low end of the range may have gotten worse, as far as that goes.

(5) People who live around Edgbaston in Birmingham know perfectly well where Tolkien got his inspiration for the towers that dominate Middle-Earth’s landscape:

The building is spectacular but perilous. It sways slightly in strong wind and its seven rooms – one on each storey – are the size of a hearth rug. But, said Bradley: “As it turned out, my CEO is a Tolkien fanatic, and so the deal was done.”

…The eyeball-shaped windows at the top of Perrott’s Folly look down in one direction on where JRR Tolkien lived as a child, and in the opposite direction on the Oratory, where he went to school. It also gives a spectacular view of the other tower he passed twice a day, the gothic ornamented chimney of the Edgbaston waterworks, which in the writer’s day would have belched smoke from the steam engines. To Tolkien true believers, there is no point looking further for the origins of the two sinister towers that loom over the world of his Lord of the Rings.

(6) A pity Ed Green wasn’t cast in this 30-second Powerball ad – he’d have done a great job with the lead character, and enjoyed the heck out of the commercial’s wild, science-fictional premise.

(7) Dale L. Skran Jr. evaluated predictions Gregory Benford made for a “Writers of the Future” time capsule in 1987, now posted on the web. Here’s one example, with the sf author’s follow-up comment as the last line:

Benford next throws out a snide little line about how “Most Americans are barely literate … just like today.” Although this statement is clearly intended to be witty, it turns out to be true. There seems little doubt that the increasing usage of computers and the playing of video games has decreased the general level of literacy, but, as Benford reminds us, it was never that high anyway!

Sad to be somewhat right on this one.

(8) There’s a lot of fun to behad generating faux pulp magazine covers with the Pulp-o-Mizer at Thrilling Wonder. I’ve seen a lot of amusing examples so far. My favorite is David Gerrold’s, posted on his Facebook page, which may well be a truth said in jest: 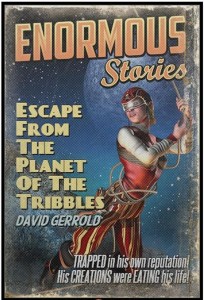 (9) Count me among the many who are outraged to read that author M. C. Hogarth is being persecuted by Games Workshop for using the term “space marine,” which it claims as a trademark despite the term having been a staple of sf stories decades beforeWarhammer 40K came along:

In mid-December, Games Workshop told Amazon that I’d infringed on the trademark they’ve claimed for the term “space marine” by titling my original fiction novel Spots the Space Marine. In response, Amazon blocked the e-book from sale [original post and update]. Since then, I’ve been in discussion with Games Workshop, and following their responses, with several lawyers.

To engage a lawyer to defend me from this spurious claim would cost more money than I have, certainly more than the book has ever earned me. Rather than earning money for my family, I’d be taking money from them, when previously my writing income paid for my daughter’s schooling. And I’d have to use the little time I have to write novels to fight a protracted legal battle instead.

Adam Whitehead has posted a helpful (and long) list of examples of prior use at The Wertzone (– quite a good blog, let me say too.)

[Thanks for these links goes out to John King Tarpinian, David Klaus, James Hay, Martin Morse Wooster and Andrew Porter.]