Although she was scribbling changes to her acceptance speech up to shortly before the ceremony, when she was named winner of the World Fantasy Award for Novel Sofia Samatar didn’t refer to her notes and could only approximate what she said when it came time to blog about it.

She knows what people are interested in, of course. What was it like to be a writer of color and be given an award in the image of H.P. Lovecraft, whose correspondence is riddled with racist statements,after a season when many have called for the design to be changed?

2. The Elephant in the Room I think I used those words. I think I said “I can’t sit down without addressing the elephant in the room, which is the controversy surrounding the image that represents this award.” I said it was awkward to accept the award as a writer of color. (See this post by Nnedi Okorafor, the 2011 winner, if you are confused about why.) I also thanked the board for taking the issue seriously, because at the beginning of the ceremony, Gordon van Gelder stood up and made an announcement to that effect: “The board is taking the issue very seriously, but there is no decision yet.” I just wanted them to know that here I was in a terribly awkward position, unable to be 100% thrilled, as I should be, by winning this award, and that many other people would feel the same, and so they were right to think about changing it.

After the con Samatar shared her explicit views about the issue:

a) Nobody’s post about winning an award should turn into a post about controversy! Everyone should be able to announce their awards with unadulterated joy! And unless the statue is changed, there will be a lot more posts like this. Can we not?

b) I don’t think the statue should be an image of any person.

c) I am not telling anybody not to read Lovecraft. I teach Lovecraft! I actually insist that people read him and write about him! For grades! This is not about reading an author but about using that person’s image to represent an international award honoring the work of the imagination.

d) I discovered, with a horror I’m sure Lovecraft would share, that we look a lot alike. 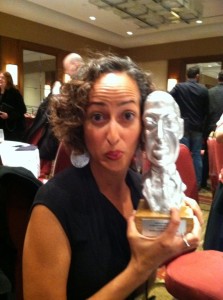