By James H. Burns: I saw Jurassic World late this afternoon.  (It had nothing to do with the article, “My Father, and the Brontosaurus”, which was written weeks ago,)

By coincidence, I saw it in the same theatre my Dad had seen the first movie in, in 1993.

(It was fun to realize that the teenagers sitting next to me hadn’t been born yet, then; and that they grew up with the dinosaur series almost as home movies.)

Forty-three years ago, I saw Conquest of the Planet of the Apes in that movie house, and the next summer, the very last of the original Apes movies, with my Dad.

The theatre is just a four block walk from where I now live.

Sometimes, maybe we need a little more fantasy in our lives than otherwise.

As our boss here knows, my life has not exactly been a bed of roses lately. (Including, just recently, the neighbor who has taken to, very strangely, staring at me, when I’m actually working on a new rose plant…)

And, truth be told, I’m not overly fond of watching dinosaurs fight each other. (I wasn’t even too happy when King Kong beat up that Tyrannosaurus Rex.)

I guess I rather just see peaceful scenes with these magnificent creatures. (Although, I have to say, the segment in Jurassic World with the flying dinosaurs, is terrific.)

Almost no one here know that for a while there, I was involved, well, not really with animal rescue, but…

Every evening, around 10 P.M., I would put small circles of dry cat food around my old home’s side yard. It would be magical to look out on a bright, moonlit night, and see raccoons side by side with possums, and feral cats. (With enough food for everyone, there were no signs of territoriality.)

It was even more enchanting to have a couple of generations of raccoons apparently regard me as a friend. And beyond astonishing the night a raccoon appeared from behind the car in the driveway — a raccoon I had not seen in quite a while, only to be followed by her family of FIVE BABIES.  To this day, I cannot adequately express my amazement when, moments later, she left, trusting this human she had known for months (or years?), with her little ones.

I’d put bird seed out every afternoon at one, and watch hundreds of sparrows, and starlings, and pigeons, and mourning doves, and a family of cardinals and one or two bluejays — along with several squirrels — happily frolic, and feed.

Go figure, the creatures of the air during the day, and those of land, toward midnight.

But my “yard,” with all this, must have given off some kind of good vibe, because on a few occasions, sickly ferals — cats I had never seen before, showed up, sensing,I suppose, a kind place, where they could be tended, til the end.

(In all cases, hours before I was going to take these stricken to the vet, to be put to sleep, they passed, on their own — their last two days filled with food, water and affection.)

Perhaps one of the best tableaus I ever saw was when a feral who would hang around my house intermittently, decided to watch over an ailing cat, one that, presumably, he also had not previously known.

The look of joy, and much more rarely, thankfully, sadness in a creature’s eyes, is something I have known, most of my life.

Which is why, I suppose, CGI can be too effective, at times, nowadays.

I had no desire to see the new Planet of the Apes movies in the theatre. The trailers, to me, had a troubling aspect.  When CGI becomes this realistic, ultimately, you’re watching a monkey suffer.

I suppose, to some degree, I’ve become a moviegoing coward.  If one watches a film at home, and you get to a disturbing sequence, you can always pause the movie, and come back to it, perhaps better braced… 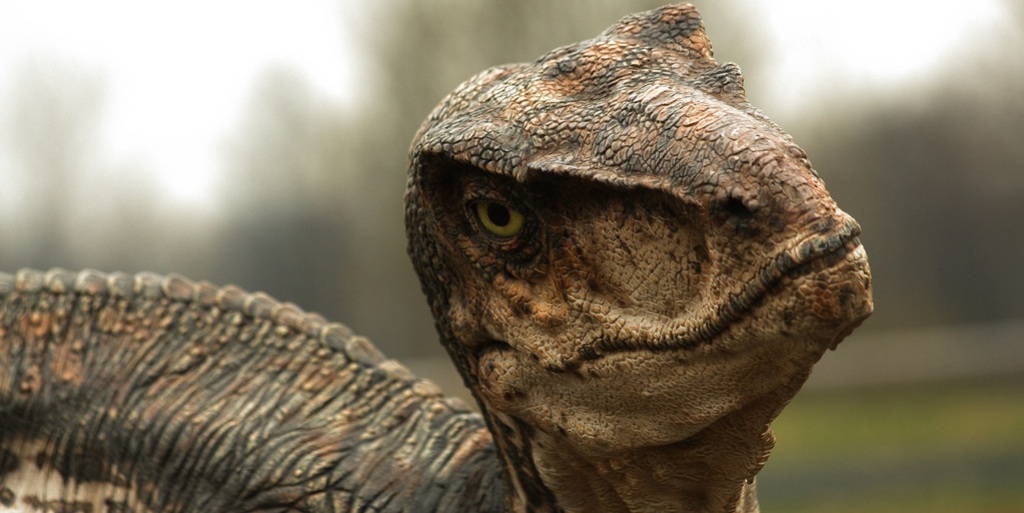 In Jurassic World, this modern artistry and skill is also put to LOVELY effect. I am giving nothing away to say that by the film’s final action, I was moved to a few tears–

And not because of something sad!

It was not the only time the movie touched my heart.

There are also remarkable depictions of a myriad of primevals in peaceful repose, enjoying their lives.

To be sure, the film is far from perfect. There seem to be some major script flaws, particularly in the second half. But there was also much pleasure, and legitimate excitement.

I’m writing these words, on my stoop, at twilight, with a whole number of saurian descendants singing happily in the trees above, perhaps saying so long to the day, and embracing the fall of night, maybe also recognizing that we’ve finally begun another summer.

Like my father, almost twenty-two years ago, I got to see some scenes in a dinosaur move, that I’m guessing that I may have always wished to.

2 thoughts on “Sons, of a Mesozoic Age”