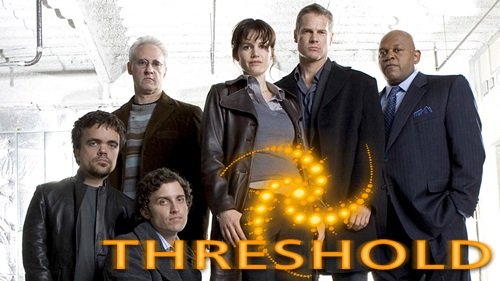 Threshold was produced by Star Trek producer Brannon Braga and starred Data actor Brent Spiner, Game of Thrones Peter Dinklage, and A-lister Carla Gugino.  Burn Notice’s Jeffrey Donovan portrays a half alien/half human serial killer waging a war of attrition against the invaders.  Viola Davis portrays a cop partially brought into the loop by the Threshold team. It aired on CBS in 2005.

The series started off well as the researchers investigated the identity, nature, and purpose of the aliens.  After several episodes, this arc was abandoned in favor of a CSI/manhunt alien of the week format.  Threshold was cancelled before the first season’s 13 episodes finished airing.