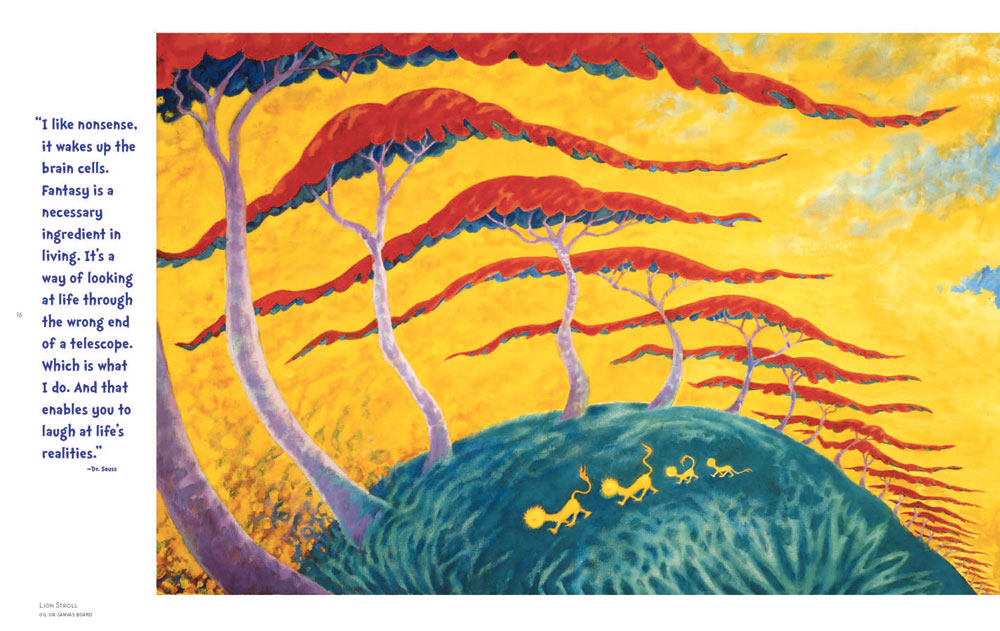 Dr. Seuss was determined some of his interests and artworks should be shared only after his death. In The Cat Behind the Hat, Caroline M. Smith makes them generally known for the first time.

For one, there was the hat collection in his secret closet.

On the discovery of Geisel’s affinity for collecting hats and where they have been stored for seventy years:
“In an actual secret chamber. And the only thing that’s in that chamber that is really interesting is his hat collection. He collected hats. He traveled to 30 countries in the 1930s, if you can imagine that. Thirty countries in the 1930s. And in those travels, he collected hats. So his private hat collection as well as the artwork was stashed in this closet. It was amazing.”

Even more interesting is the revelation of Seuss’ darker, and intensely personal paintings. As explained in the promotional copy on Amazon:

This exquisitely produced collector’s edition holds four exclusive lithographs along with a cloth-covered edition of The Cat Behind the Hat, a beautifully illustrated book that redefines Dr. Seuss as an iconic American artist. Illustrator by day, surrealist by night, Dr. Seuss created a body of little-known work that he called his “Midnight Paintings.” For sixty years, this work allowed Geisel to expand his artistic boundaries outside the confines of commercial influences and deadlines. The book exuberantly juxtaposes Geisel’s “Midnight Paintings” with his best -loved children’s books. Though he fiercely protected his “Midnight Paintings” from criticism during his lifetime, his intention all along was for these works to be seen when he was gone. This comprehensive look at the art that he created over his lifetime, along with four frame-able prints, is an eye-opening peek behind the public persona into the real story of the man who was Dr. Seuss.

The book costs a mere $180 – maybe you can work a package deal with someone who will give it to you as your Christmas, birthday and Groundhog’s Day present.

8 thoughts on “Seuss Secrets and Rarities”