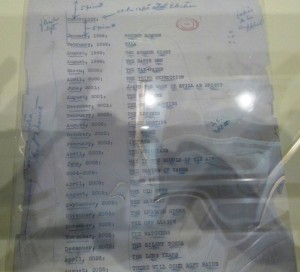 By John King Tarpinian: The L&M Art Gallery in Venice, CA had their opening night reception “For The Martian Chronicles” on November 8. The exhibition continues until the first week of January. The exhibit had modern artist’s interpretations of Mars plus four pages of The Martian Chronicles manuscript from the UCLA archives. Books, loaned by me, were on display in their library.

What is very special about this art gallery is that the main building is the converted power station next to the house Ray lived in with his parents and brother until Ray married. Not only did Ray share a bedroom with his brother they shared a bed. The west gallery building sits on the land where the house used to be. Ray had set-up an office in the garage. This is where Ray wrote the majority of his Martian stories. That makes this exhibition very special.

Curated by Yael Lipschutz in honor of Bradbury and his journey into the red unknown, the exhibition will include the original manuscript of The Martian Chronicles, alongside artists ranging from Yves Klein—whose mysterious blue sponge sculpture from 1958 is as strange and disconcerting as any Mars rock—to Larry Bell, Jonah Freeman & Justin Lowe, Matthew Ritchie, and Vija Celmins, whose exquisite renderings of the cosmos serve to propel the viewer forward through space as we travel with Bradbury on his interstellar mission. Some works directly invoke the Red Planet, such as Ed Ruscha’s Hold on For a Minute, I’m No Martian (1980), and Tom Sachs’ Phonkey (2012), a large-scale sculptural tableau, in which a lone radio sits silent, stranded atop a scorching Martian terrain.