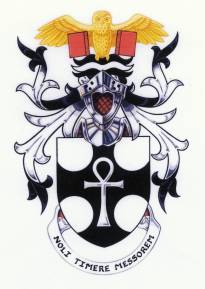 The College of Arms, official repository of the coats of arms and pedigrees of English, Welsh, Northern Irish and Commonwealth families and their descendants, granted a coat-of-arms to Sir Terence David John Pratchett of Broad Chalke, Wiltshire on April 28:

The Arms are blazoned: Sable an ankh between four Roundels in saltire each issuing Argent.

The Crest is Upon a Helm with a Wreath Argent and Sable On Water Barry wavy Sable Argent and Sable an Owl affronty wings displayed and inverted Or supporting thereby two closed Books erect Gules.

The motto means “Do Not Fear the Reaper.”