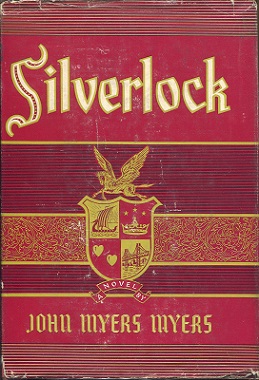 By John Hertz (reprinted from Vanamonde 1213):  After John Myers’ Silverlock was published in 1949 it languished two decades until Terry Carr at Ace published a paperback (1969).

Let’s suppose you know a white streak in the hair of our protagonist Clarence Shandon makes him Silverlock.  He, a 35-year-old Chicagoan — Dante’s age when he dreamed The Divine Comedy (1321) — shipwrecked and afloat nine days out of Baltimore, meets in the water a man calling himself Widsith Amergin Demodocus Boyan Taliesin Golias none of which Shandon recognizes, watches Moby Dick smash the Pequod which he also does not recognize, and goes through three hundred pages of adventure in the Commonwealth of Literature, footing, fighting, feasting, finding thirtyscore characters of song and story none of whom he recognizes.

Eventually we wonder at his having seen a Pacific Ocean whale (H. Meville, Moby-Dick, 1851) a century later in the Atlantic, and indeed his saying blandly in the first place he was on the Naglfar, which being the ship made of the nails of dead men Loki will navigate when all things are destroyed at Ragnarok seems at best strange for the mundane vessel equipped with a radio our protagonist describes until he gives us its name twice in the fifth paragraph and we never hear it more.

Stories a poet and audience have in common are a great resource.  Say “Was this the face that launched a thousand ships?” and you bring without naming Helen of Troy from Greek mythology three millennia ago, and quote without citing Marlowe’s Faust (Act V, sc. i) from the 16th Century.  An audience who knows them delights.

To sing of the known is a time-honored art: The Iliad and The Odyssey three millennia ago, the Vedas earlier.  The Ballad of Harlaw that Jeannie Robertson (1908-1975) sang, about a battle in 1411, was printed in a 1549 collection; Sir Walter Scott published another about it in 1806.  The fame of Scott and Robertson came from an audience that did not know, reached by artists so good their work appealed intrinsically.

We begin to touch on speculative fiction, which tells of things an audience cannot have known because they have never happened.

To introduce the 1979 printing (and thereafter) Anderson says, “it’s incomparable fun….  more….  Life is often stark and, in some sense, ultimately tragic.  Good comedy recognizes this truth and draws strength from it….  Golias makes the tale surge with energy from the beginning … [Silverlock] has experiences terrifying or heart-wrenching….  high seriousness is enhanced by mirth [NESFA p. 17].”

Niven says, “Myers must be in love with words (as I am).  He must roll them around in his mouth (as I do) to get the taste….  I went through it like a tourist in Paradise….  I recognized about a third of the characters….  Afterward I went hunting for others….  Silverlock is a … B.A. in Business Administration learning how to read, and why [pp. 21-22].”

Pournelle says, “It is the sort of book that can take an engineer obsessed with putting man into space and send him to the reference library…. it did this for me [p. 20].”

Not everything in Silverlock comes under never happened.  A third of the way along, Golias gives a hall of feasters “The Death of Bowie Gizzardsbane” in a hundred four-stress lines, like a skald or a scop, which he is, and might lead you to remember the Alamo: it’s about that battle, Sam Houston (1793-1863), Davy Crockett (1786-1836), and hero of the song Jim Bowie (1796-1836), “the war-wise winner of battles … melting with death.  Yet the might of his spirit / Kept a tight grip on the trust he’d been given….  Killing, though killed.  Conquered, he won” (pp. 126-129).

Our protagonist, who is from that world — Golias seems to have been everywhere — does not recognize this story either.

Silverlock is full of fighting.  Also drinking.  Heart of oak are the men, and it is men, mostly, and of that kind.  Silverlock himself is athletic; he was on his school’s rowing team.  The women are mostly submitters or seducers.  What if you don’t think that the good life?  What if you find yourself thinking “Is that all there is?”

You could say, in Peggy Lee’s next line, “Then let’s keep dancing” (J. Leiber & M. Stol­ler, 1969) — although there’s booze in that ballad too.  You could say Silverlock is a book of its time — and indeed, how not?  You could say Myers wrote what he knew.  Let’s follow the Ernie Kovacs Rule and take a good look (as his strange — of course — 1959-1961 television game-show was entitled).

That name Naglfar is Myers’ signal there is something strange about this book.  Is it the adventure?  The incongruity?  The congruity that upon inspection underlies it?

Why does Silverlock go to Hell?  Why is he so helpless there?  Why doesn’t the book end when Satan tells him there’s no way out?  What happens with Silverlock and the horse?  Why?

Speculative fiction often carries characters who not knowing can be explained to or shown learning.  But nobody explains to Silverlock, and he hardly learns.  He sees what he can.  Yet that does increase.  The remarkable thing — I believe the book is a comedy — is that he learns at all.

7 thoughts on “That Book Silverlock”