When Ray Bradbury’s 2004 Retro Hugo brought $28,734 in an estate auction last month that made me wonder — What individual Hugo Award is worth the most money?

Why did Bradbury’s Hugo command a much higher price? For three main reasons.

Are there Hugos that might fetch a price even higher than Bradbury’s?

I think people who bid on a Hugo Award have an affinity for the sf field and know why the award is important. With that in mind, it could be argued that Robert Silverberg’s 1956 Hugo for Most Promising New Author should be one of the most valuable, not just for his literary output, but because he’s repeatedly made that award the turning point of a funny comment while emceeing or presenting at Hugo ceremonies over the years. Unfortunately, the fanhistory we cherish rarely translates into cash value (or we’d all be rich!)

What about Hugos won by the sf writers with the biggest reputations, Robert A. Heinlein, Isaac Asimov, and Arthur C. Clarke?

Heinlein’s 1961 Best Novel Hugo for Stranger In A Strange Land must be worth a pretty penny – an enduringly popular book widely read outside of fandom that became embedded in Sixties popular culture. Or there is his 1960 Best Novel Hugo for Starship Troopers (1960) – a veteran or military sf fan with deep pockets might bid that up (and in that case, the bug-hunting movie based on it makes it all the more attractive, despite how bad the film actually was.)

In Isaac Asimov’s case, the 1966 Hugo given to Foundation as Best All-Time Series is probably his most valuable — voted in recognition of his most iconic work, the series whose concept of psychohistory is credited by Nobel laureate Paul Krugman for sparking his interest in economics. Asimov also enjoys an enduring celebrity as witnessed by the attachment of his name to Microsoft’s recently-announced computer telemetry system.

The Arthur C. Clarke Hugo I expect collectors would pay the most for, by far, is his 1969 Best Dramatic Presentation Hugo for 2001: A Space Odyssey – always assuming he received a rocket for that in the first place, as I tend to expect he would have based on how the official Hugo Awards site credits the movie:

Beyond the Big Three, it would be a mistake to overlook the media appeal of Philip K. Dick and the potential market for his 1963 Best Novel Hugo for The Man In The High Castle. PKD’s name is frequently invoked by the critics of our dystopian present, and his works have been turned into movies like Bladerunner, Total Recall and Minority Report featuring some of Hollywood’s most bankable stars.

All the Hugos I have mentioned so far follow the standard rocket-on-a-wooden-base design, so the artistry of the award isn’t a factor that would enhance their value. (Maybe just the reverse in the caseof Arthur C. Clarke’s 1956 Hugo for the Best Short Story, “The Star,” which was made with an Oldsmobile Rocket 88 hood ornament…) 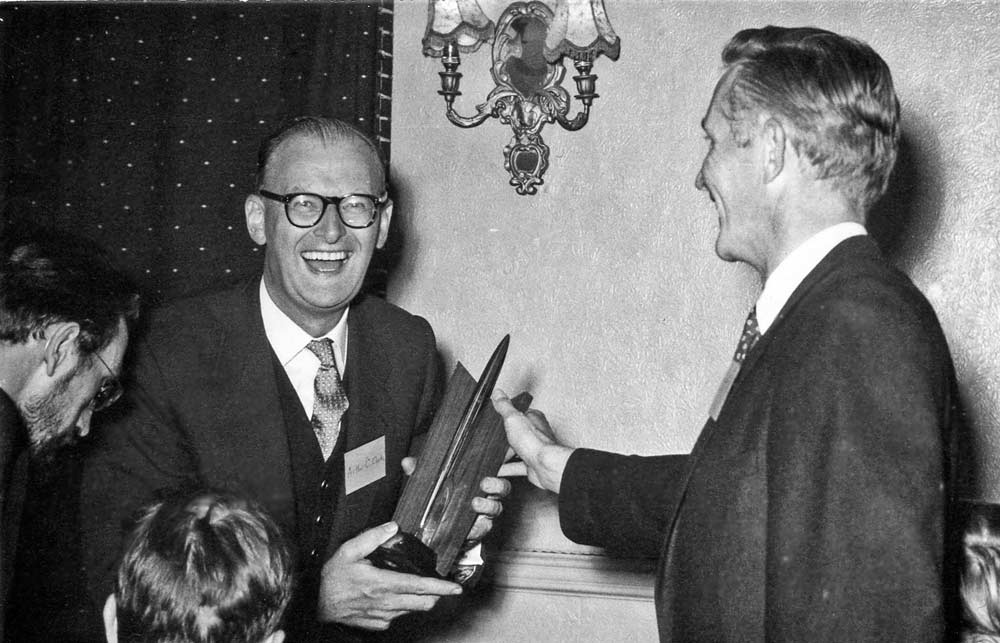 Arthur C. Clarke being presented his 1956 Hugo Award by NyCon II chairman Dave Kyle at the 1957 Worldcon, Loncon I.

But over the past 30 years most Worldcons have commissioned Hugo bases that depart from the cliché plinth-and-rocket. They all have their advocates and among my favorites are:

However, my absolute favorite is Tim Kirk’s base for the 1976 Hugo, co-designed with Ken Keller, a cold-cast resin base wreathed with a dragon. Tragically, there isn’t a good image of it online. (After looking at the photo on the official site you’ll be questioning my sanity: “That’s the most beautiful Hugo base? It looks like a rocket on an oil can!”) But I’ve seen one up close many times at Larry Niven’s home. I think it’s quite beautiful.

So looking at who won the Hugos of 1976, one prospect jumped out as having the perfect combination of attributes to bring a good price at auction.

The question, as with 2001: A Space Odyssey, is whether Ellison got a copy of the rocket, but for purposes of this discussion I’ll assume he did. Ellison enjoys the celebrity built on a long career of writing sf, fantasy and horror in all media – print, TV, movies, comics, as a Grammy-nominated voice actor. He’s even been in a commercial or two — remember “Harlan Ellison, Noted Futurist” plugging Geo Metros? “A Boy and His Dog” is one of his best-known stories. And there is a legion of Ellison collectors snapping up everything he produces. Just imagine the market for an Ellison Hugo?

So unless somebody can talk me out of it, I nominate the Clarke 2001 and Ellison A Boy and His Dog Hugos as the most valuable out there.

8 thoughts on “The Most Valuable Hugo”