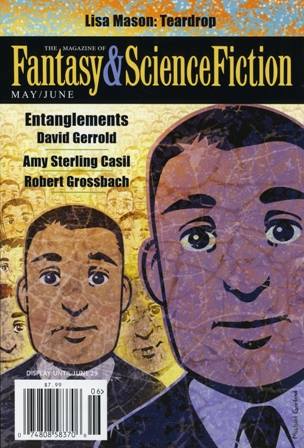 Actor and past president of LASFS Ed Green is Tuckerized by David Gerrold in “Entanglements,” a story in the latest Fantasy & Science Fiction.

The protagonist describes the birthday party he is having:

By the time the party finally broke up, after the last ambulance pulled away and the police were satisfied that Ed Green was going to keep his clothes on this time–we told them he was practicing for an upcoming audition (“The Canoga Park Players are planning a revival of NAKED BOYS SINGING…”) and that seemed to mollify the officers, although they declined the offer of comped seats for opening night…

And the story begins, “I am going to kill that Pesky Dan Goodman,” a reference to another LASFSian.

Mr. Green, when approached by the media, said “I was young and I needed the rent money.” Also, “David actually asked permission in advance.”

The story has elicited a range of responses:

A “thematic sequel”, says the editorial blurb, to the author’s award-winning “The Martian Child”. Which means . . . What? Both stories are autobiographical fiction, with narrator and author not clearly distinguished. But “The Martian Child” is a story about something the narrator did: adopting a son and the consequences this had in his life. “Entanglement” is at its heart about what didn’t happen: a void in his life and its consequences; the narrator is the passive observer of events that never took place.

“Entanglements” by David Gerrold is a very strong novelet, with playful autobiographical elements. A “quantum empathiser” provides the first person narrator, an SF writer called David Gerrold, with access to parallel universes that show how his life might have developed in different circumstances. Although written in a deceptively relaxed and rambling style, underneath it all Gerrold makes a very moving point about the roads we take and don’t take in life. There is also a surprising Author’s Afterword.

1 thought on “The Storied Career of Ed Green”