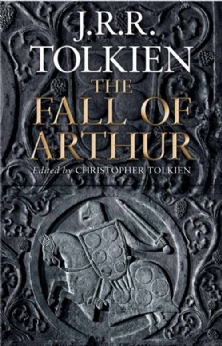 J.R.R. Tolkien’s The Fall of Arthur, a never-before-published poem over 200 pages in length, will be released by HarperCollins in May 2013.

HarperCollins says Tolkien set aside this work to write The Hobbit and it was left untouched for 80 years:

The Fall of Arthur recounts in verse the last campaign of King Arthur who, even as he stands at the threshold of Mirkwood is summoned back to Britain by news of the treachery of Mordred. Already weakened in spirit by Guinevere’s infidelity with the now-exiled Lancelot, Arthur must rouse his knights to battle one last time against Mordred’s rebels and foreign mercenaries.

Christopher Tolkien edited the manuscript and wrote three essays for the book, (1) about the literary world of King Arthur, (2) the deeper meaning of the verses, and (3) his father’s work to bring it to a finished form.

The poem’s opening lines appeared in The Guardian:

Arthur eastward in arms purposed
his war to wage on the wild marches,
over seas sailing to Saxon lands,
from the Roman realm ruin defending.
Thus the tides of time to turn backward
and the heathen to humble, his hope urged him,
that with harrying ships they should hunt no more
on the shining shores and shallow waters
of South Britain, booty seeking.

John Lundberg observes how different this verse form is from that of 15th century poet by Thomas Malory in his piece for Huffpost Arts & Culture:

Tolkien, who passed away in 1973, took the Arthurian legends so far back, in fact, that he passed over hundreds of years wherein blank verse was the standard form of English epic poetry. That means his new poem won’t feature the rhythms you’d recognize from most English language epics, like translations of Dante’s The Divine Comedy … Tolkien instead embraced the Old English tradition of alliterative verse — the language of Beowulf and much of the medieval poetry he loved.

The stock question at times like this, against all sense, is whether Tolkien’s latest posthumous work will live up to The Hobbit, The Lord of the Rings, or even “Leaf by Niggle.” Despite what’s known about Tolkien’s procrastination and perfectionism, I believe it speaks for itself that any manuscript he left in the drawer is one he knew he was capable of improving if he chose to invest the effort. So Tolkien fans should be delighted to get a peek at The Fall of Arthur – which was by no means certain to happen – and be pleased if it is readable and appealing.