By Mark L. Blackman: On the evening of Monday, December 12, 2016, the New York Review of Science Fiction Readings Series continued its tradition of celebrating the December Holidays Season with “Family Night,” featuring one of its favorite families, Ellen Kushner and Delia Sherman (in their eighth, by my count, December appearance). Also traditional was the December guest host. (Her anonymity here is due to her outside professional concerns.)

The event, held at the Series’ venue, the Brooklyn Commons Café (in the outskirts of Downtown Brooklyn – dare we call it “Bordertown?”), opened with a welcome from its Executive Curator, Jim Freund, who is otherwise the longtime host of WBAI-FM’s Hour of the Wolf radio program on sf and fantasy (the show broadcasts and streams every Wednesday night/Thursday morning from 1:30-3:00 a.m.) He cautioned the gathering that the readings were being Livestreamed (this later surprised Kushner, who’d expected only to be “seen” on radio), and thanked those who had donated (the readings are nominally free, with a suggested donation of $7) as they help the Series continue (there is a rental fee for the space).

Moving into 2017, upcoming readers will be:

Family Night came about, said the evening’s guest host, because December is traditionally a family time; since then, the theme has grown from the readers to encompass the audience regulars, who have become a family of sorts (Kushner soon after referred to “the NYRSF Holiday Reading family”), and stated that it was “an honor to be part of it.”  Tonight’s readers, she concluded, were “a very special pair of writers, spouses and people,” and introduced the first reader. 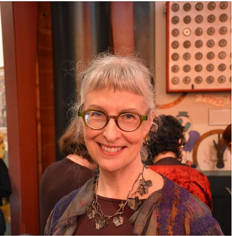 Delia Sherman is the author of, among other works, the Prometheus and Andre Norton Award-winning The Freedom Maze, The Evil Wizard Smallbone and The Fall of the Kings (written with Kushner). Prefacing her reading, she promised a selection that wouldn’t “bring blushes to young cheeks.”  (Ellen’s offering, however, “will bring blushes to many cheeks.”) With that caveat, she read from Chapter 2 of The Evil Wizard Smallbone. On a cold December night in Maine, Nick, a runaway lost in the woods, stumbles into the Victorian mansion of the titular evil wizard – it even says “Evil Wizard” on his business card, and moreover he is the proprietor of Evil Wizard Books. Smallbone declares that Nick (whom he calls Foxkin) is his apprentice and promptly puts him to work around his house, farm and shop. The boy finds it magically impossible to run off, and, when he talks back, discovers to his dismay that he has, it seems, spent most of a week (and missed Christmas) turned into a spider. The evil wizard’s brusqueness was a source of much humor.

During the intermission, a raffle was held (for those who’d donated), with the prizes being a “rare” set of press-on tattoos from the online serial program Tremontaine (pronounced, we learned, “Trem-on-ten,” not “-taine”), a “Live, Laugh and Love” mug, and the copy of The Evil Wizard Smallbone from which Sherman had just read; all raffle winners also received a pencil commemorating Ellen’s and Delia’s 20th anniversary. (That the tickets drawn were consecutive, and one winner was the guest curator, might have prompted cries of “rigged” from someone who shall not be named.) 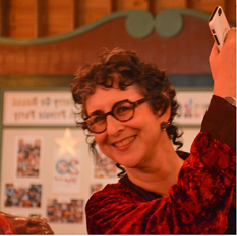 The second reader of the evening, Ellen Kushner, is the author of the World Fantasy Award-winning Thomas the Rhymer, the children’s book The Golden Dreydl (adapted by her) as The Klezmer Nutcracker), and the much-loved novels and related short stories in the Riverside series, which has been called a “fantasy of manners” and “mannerpunk,” alternating wit, intrigue, sex, swordplay and chocolate. Swordspoint (an audiobook of which won an Audie Award) introduced readers to the setting, and was visited again in The Privilege of the Sword, The Fall of the Kings (written with Sherman), and an online collaborative prequel to Swordspoint, called Tremontaine, with the e-publisher Serial Box (SerialBox.com; season two premiered this past October). In addition, Kushner co-edited (with Holly Black) Welcome to Bordertown, a revival of the original urban fantasy shared world series created by Terri Windling.

The story from which she read, “When I was a Highwayman,” is brand new and slated to appear in The Book of Swords, edited by Gardner Dozois. Set in Riverside, 4-5 years before Swordspoint and 12 years after Tremontaine, it is a standalone that she hoped is comprehensible to non-readers of the Riverside series. (The series is not written in order, and Kushner has gone back to prequels and sequels to fill in and expand on incidents; at times this may be limiting.) Here the young swordsman-for-hire Richard St. Vier (who serves as narrator) is in partnership with the grifter Jessamyn. When work for them dries up – she’s recovering from a terminated pregnancy and the nobles for whom he performs in demonstration bouts of swordplay or as a bodyguard at weddings are in the country for the summer – and they’re running out of things to pawn or sell, he’s talked into accompanying two lowlife acquaintances as they waylay traveling nobles. (His sword is to be the incentive to “stand and deliver.”) Unfortunately, he foregoes a mask and their very first robbery victim turns out to be a young nobleman with whom he’s quite intimately acquainted. Laughter was frequent and out loud (I’m uncertain about occurrences of cheeks blushing).

As traditional at these Readings, the Jenna Felice Freebie Table offered giveaway books, while at another table, books by Sherman and Kushner were for sale and autograph.